It’s National Voter Registration Day, UMMA student blog readers, and the fourth of ten Tuesdays leading up to the 2020 November general election. Each Tuesday until Election Day on November 3, we will be posting topics on democracy, voting, and justice in order to spark conversations about the upcoming election. 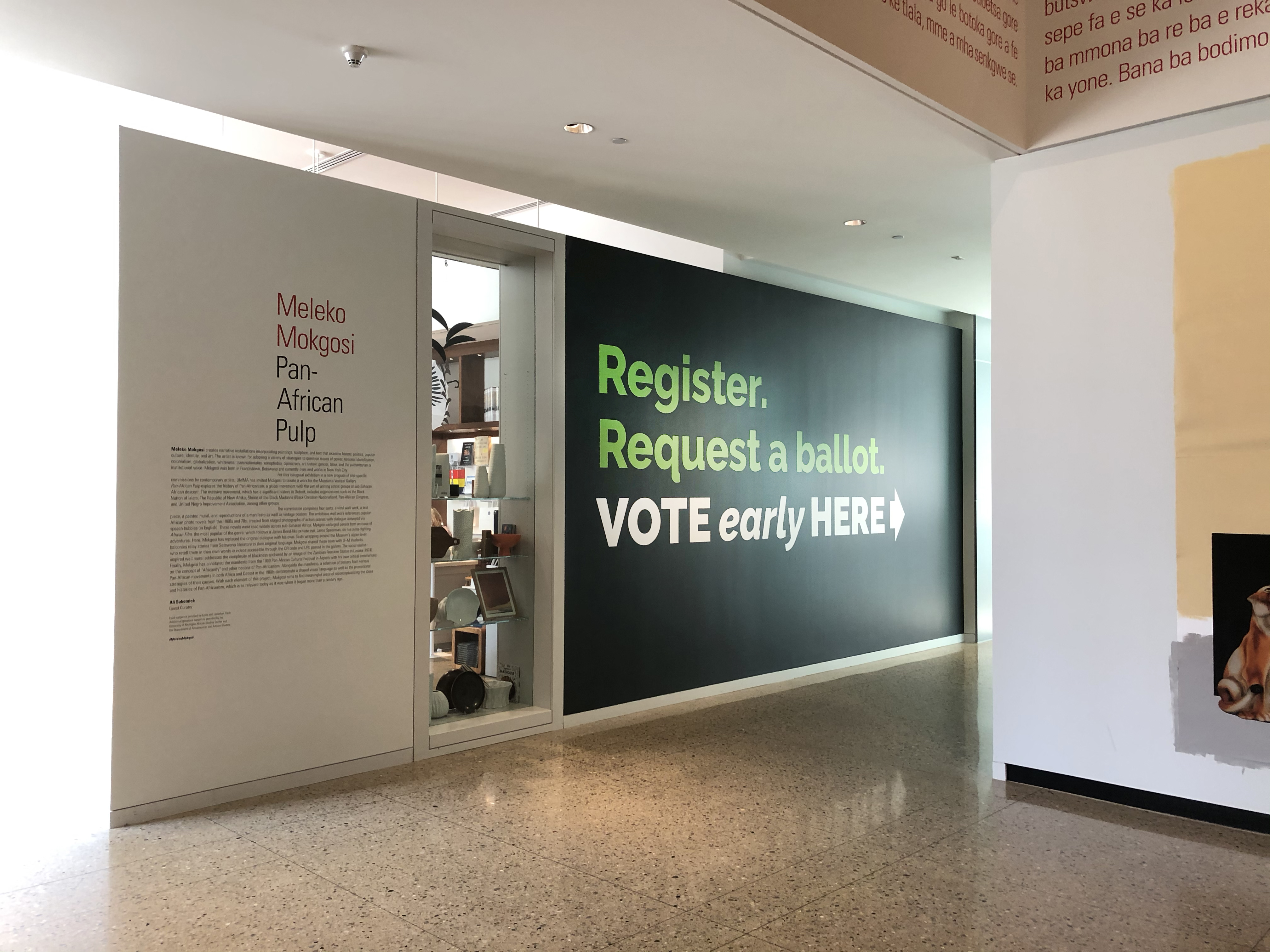 This past week, UMMA staff members and employees of the Ann Arbor City Clerk’s office set up a Satellite City Clerk’s Office in UMMA’s Stenn Gallery. The office will be available for those wishing to register to vote, request a ballot, and vote early, among other services. The Stenn Gallery is a room on the northwest corner of the building with glass walls, making its interior visible to passersby.

The room is still a kinetic light blue color, as the walls and much of the furniture are recycled from Courtney McClellan’s Witness Lab exhibition and installation earlier this year. The room has a lot of natural light, monitors and tables, and an overall streamlined design. It is a central, dedicated space at UMMA for engaging with this year’s United States presidential election.

Now, I’ve had civic duty impressed upon me for as long as I can remember. From age eight to eighteen, my dad insisted on taking me into the voting booth with him at every election. I remember tagging along on what seemed like random Tuesday evenings to the middle school gym or community center in my hometown, wherever our pop-up precinct polling place happened to be. There were always long lines, sterile surroundings, and a hushed energy that permeated the room. I’d notice the immediate shift in feeling once we got to a booth, the small cardboard walls providing an illusion of isolation and privacy. Every action became noticeably deliberate. It struck me as a strange but almost holy place.

In the days leading up to each election and even in line to check in at the voting booth, we’d be discussing the candidates and ballot initiatives. My dad and I disagreed on a lot of things – we still do – but every once in a while, I’d change his mind. It was the first space I knew where political dialogue and disagreement could be a helpful and productive thing.

A lot of that feeling of welcome confrontation came from the fact that we were in a dedicated, neutral space. Physical spaces can heavily affect the mental and emotional states of their inhabitants. Cullen Washington Jr.’s recent exhibition at UMMA, The Public Square, gets directly to this point. The show, which existed in person at the beginning of 2020 and is now viewable online, includes nine mixed media collages called “Agoras” that are each on fifteen-to-twenty-foot canvases. They are abstract, two-dimensional constructions on a grid with various brushstrokes and found objects that go beyond the boundaries of the original foundation. They feel neat and logical, yet free and boundless at the same time.

They’re also huge. I often found myself in that exhibition early this year, and every time I stood in front of those pieces, it felt like I was in the middle of some kind of frozen colorful windstorm. These works create an energetic atmosphere, one where it feels less daunting to take risks and break conventions. 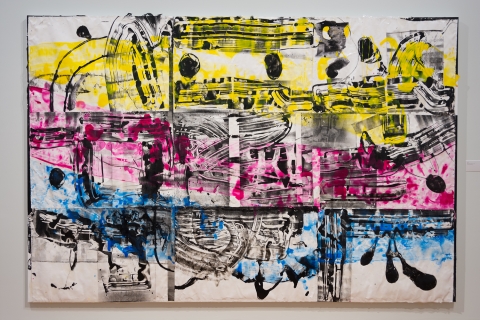 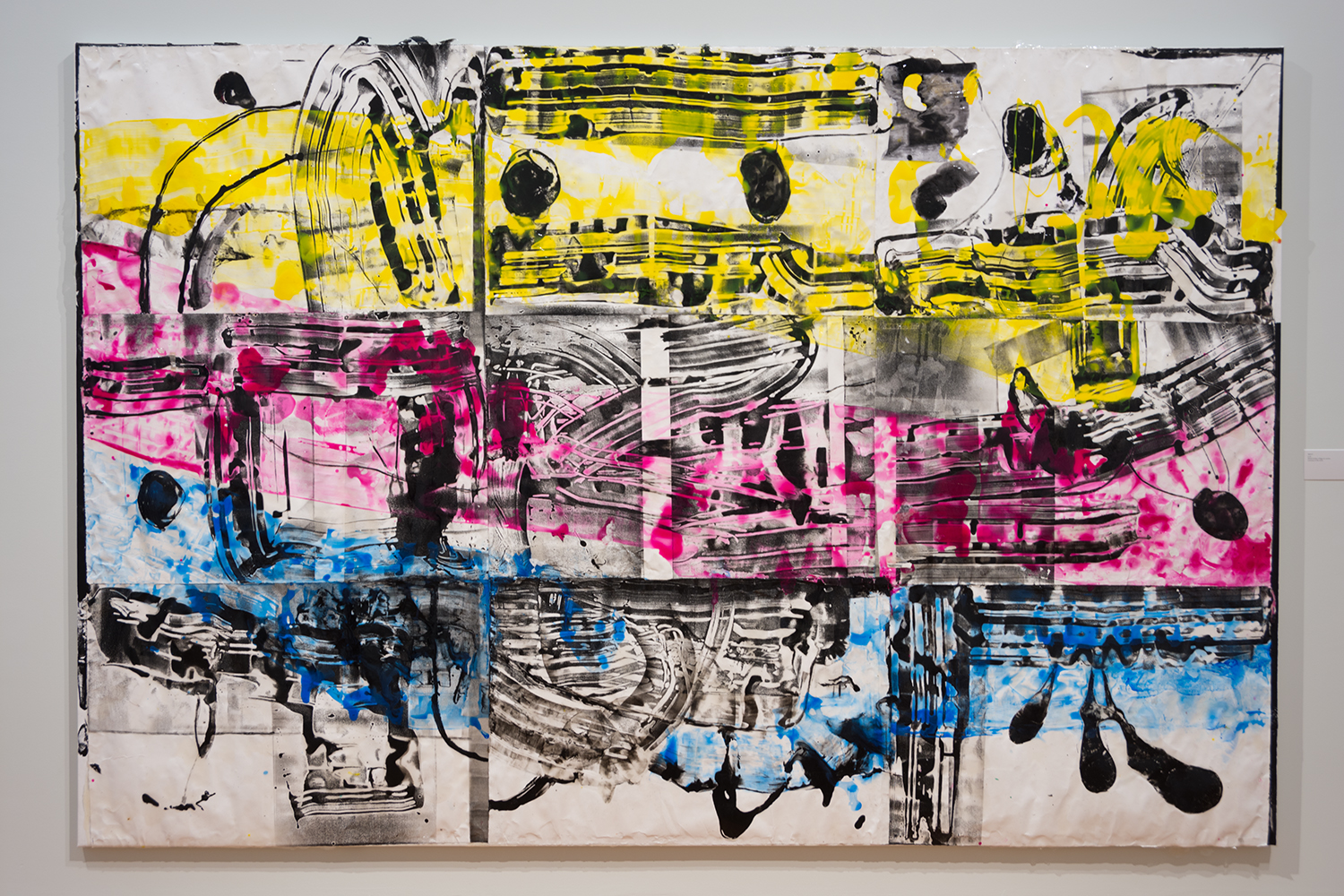 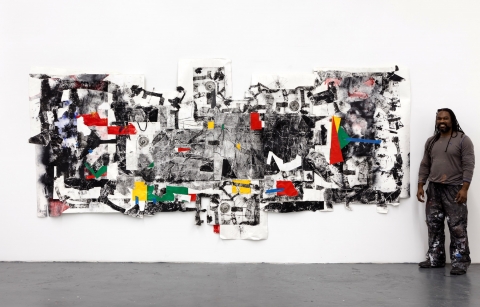 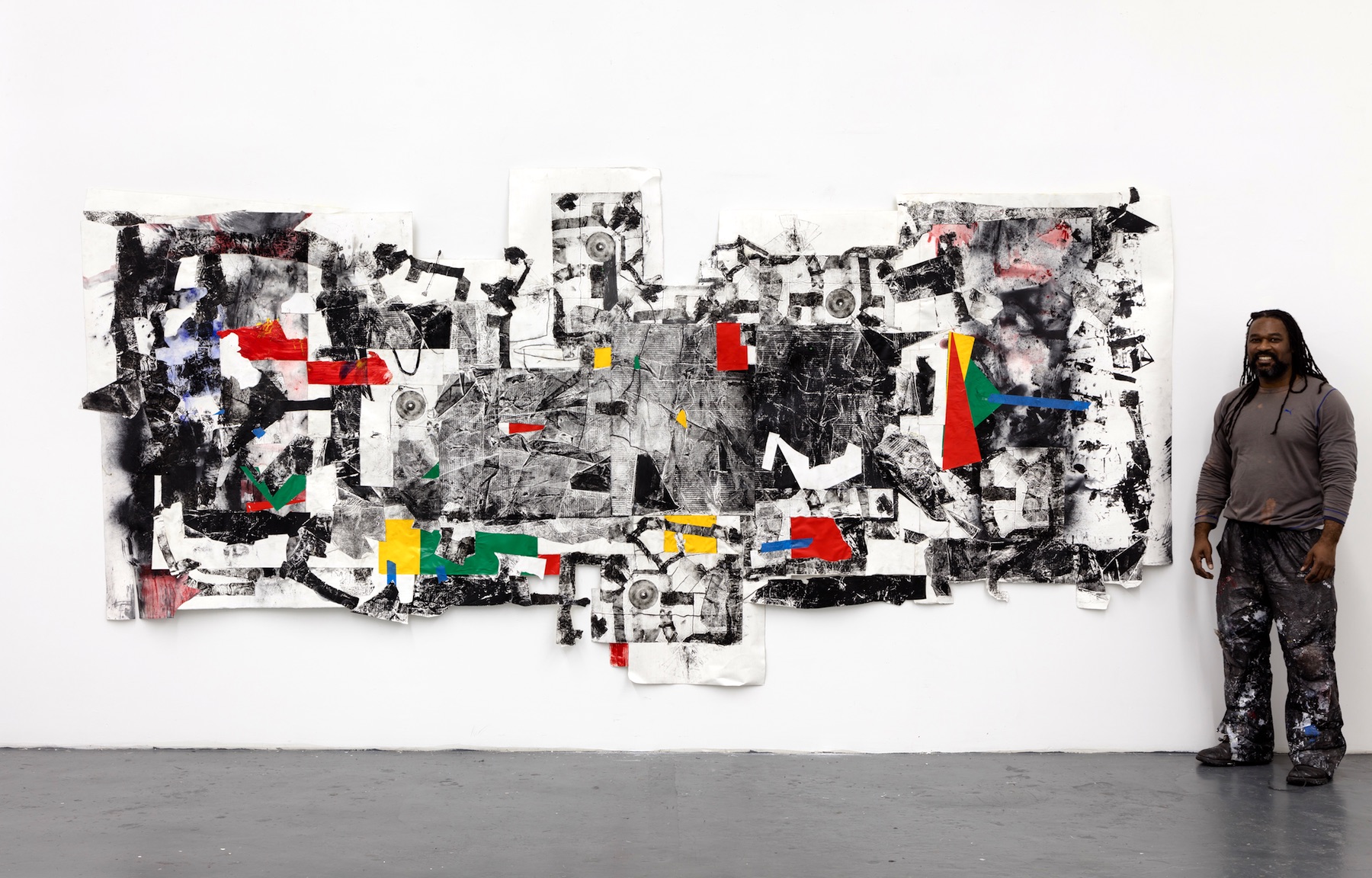 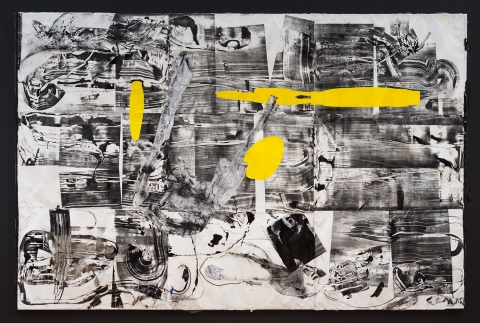 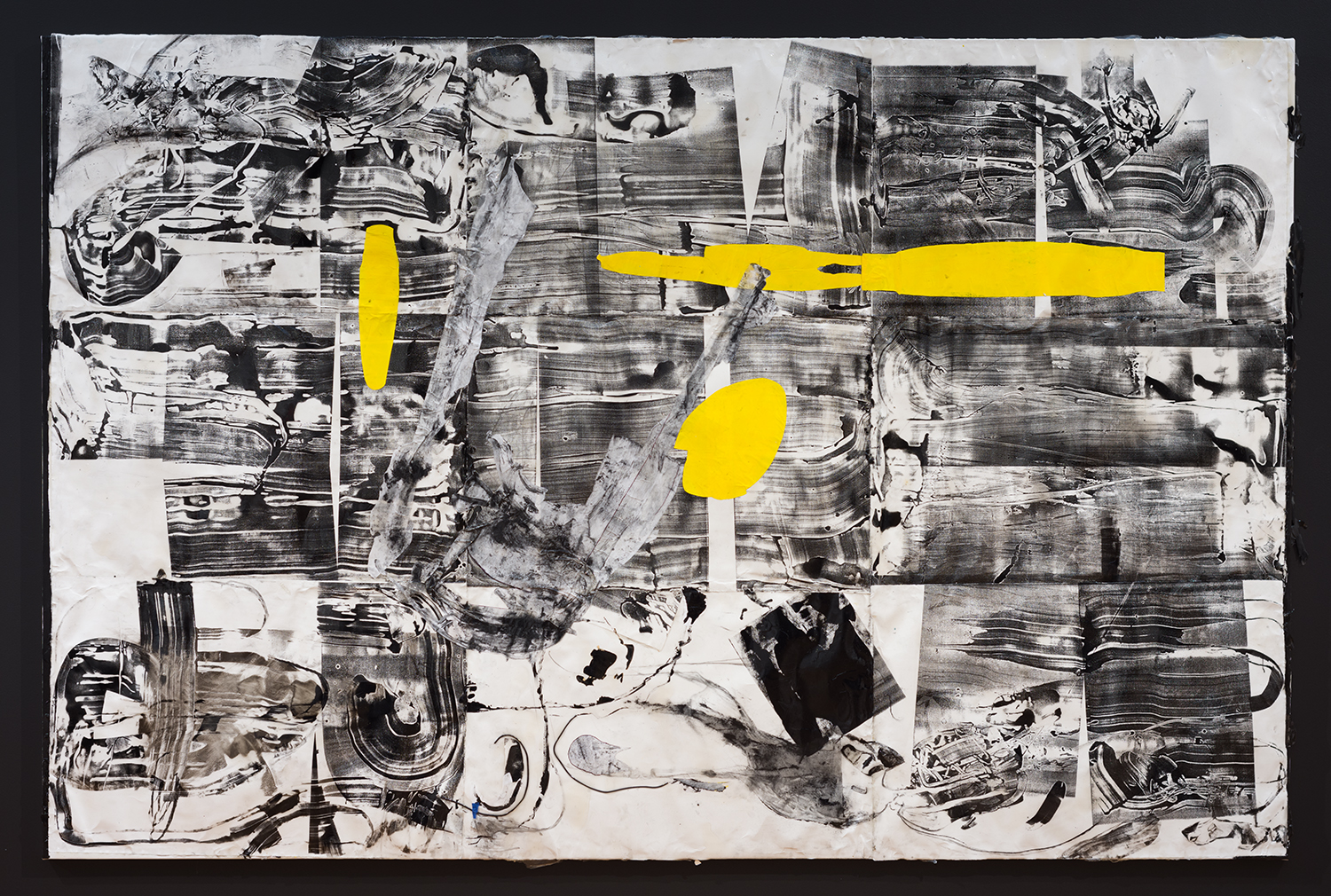 In his January 23 talk for the Penny Stamps Speaker Series, Cullen Washington Jr. explained that he uses grids so much in his work because “the grid is inter-genetic, interracial, international, inter-gender, interconnected, inter-relational and interdependent. The grid is transcendent of political personifications. No blackness, no whiteness, nor immigrant. The grid is the infinite field of activity where the lives of things and people intersect with mutual exchange.”

In creating these large grid-based pieces, he changes the architecture of the space they inhabit and creates a new space, a space for intersection. While it was not presented as such, the exhibition felt like a precursor to the Vote 2020 campaign in its openness to mutual exchange. The feeling it creates, of willingness to participate in an interchange, is the exact feeling that should exist in our civic spaces, too.

A civic space in a democracy needs to be a space open to risk-taking and experiment, where no one feels pressured to make the same choice as their peers. It may be surprising to see a city clerk’s office in an art museum – but head to the space and experience for yourself how well it fits into the environment of UMMA. Creating physical space for dialogue, learning, and disruption is one of the goals of the art museum as well as a crucial part of the civic engagement process. I hope the opening of this satellite office, as well as the recent reopening of UMMA to U-M faculty, staff, and students, will help to create such a space.

I encourage you to visit the satellite office if you are able (a valid MCard and face mask are required to enter), and take time to think about the spaces in your own life where civic discourse takes place. Making room for democratic engagement is more than just a mental commitment – but means taking the time and space for it, too.

Check back in next Tuesday for another post, with the theme of absentee voting! You can always find out about more Vote 2020 programming by signing up for UMMA’s Art & Activism email. The content in this piece represents the opinions of its author and interviewee and not necessarily those of UMMA or the University of Michigan. 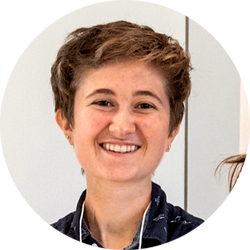 Emily Considine is a senior BFA student in Art & Design at the University of Michigan, hoping to become an illustrator. In addition to her involvement with UMMA, she’s done various illustrations, comics, and design work for Arts at Michigan, Forbidden Stew, and ArtsEngine. You can find her most nights during the school year at The Michigan Daily, where she manages the Opinion page.