Mythology Connections: A Delicious Take on an Infamous Beheading

Mythology Connections is a series centered around mythology in UMMA’s collection. We all had at least one mythology phase- Greek, Roman, Egyptian, whatever struck your fancy. Books like Rick Riordan’s Percy Jackson and the Olympians series definitely had a hand in that for some of us, and now Madeline Miller’s Song of Achilles has joined the ranks. This series seeks to reignite that phase, bringing us all back to our roots while making connections to the wonderful art in UMMA’s collection.

Mythology Connections: A Delicious Take on an Infamous Beheading 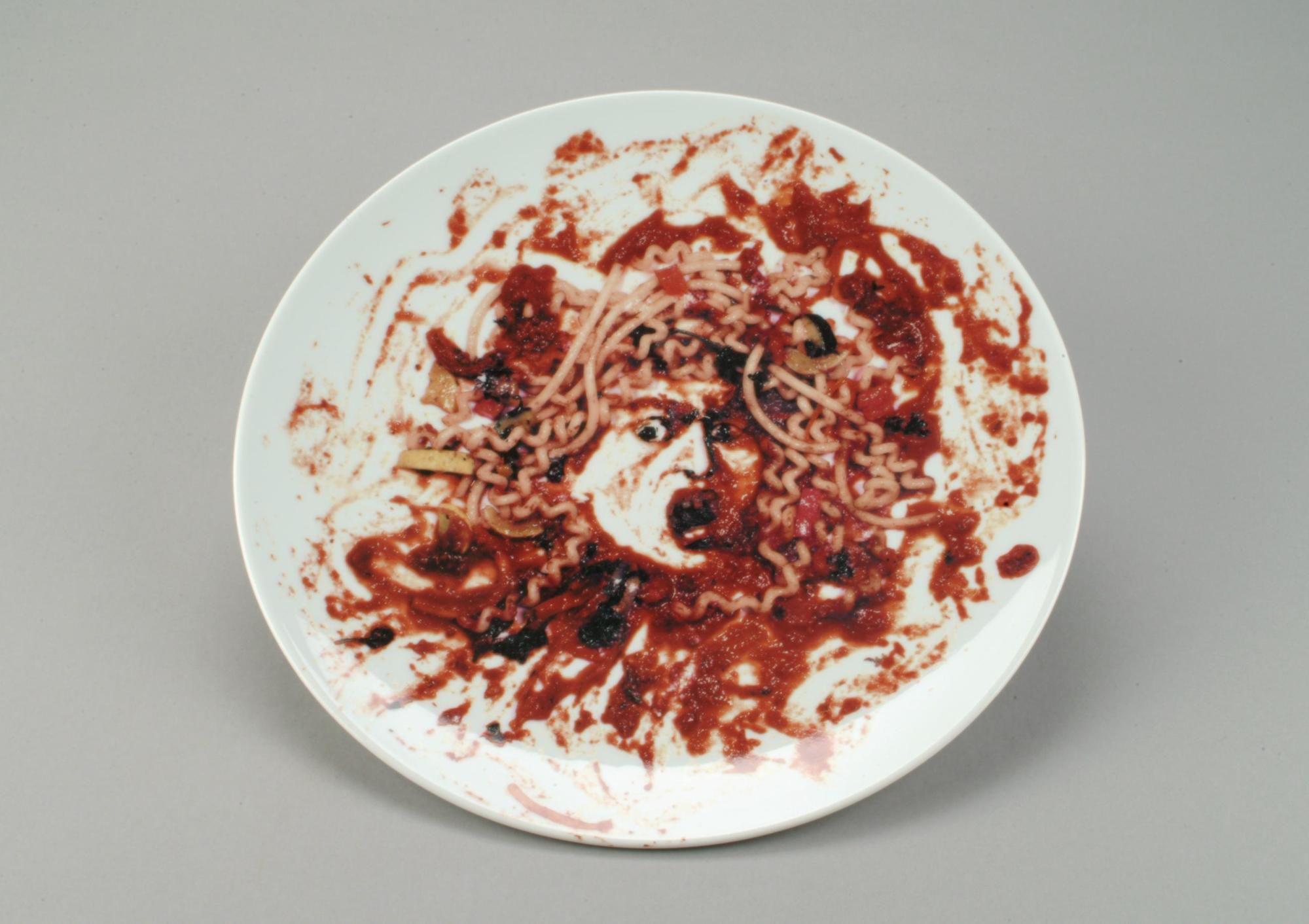 Subject matter
In this work, Vik Muniz humorously appropriates the head of Medusa from Caravaggio’s c. 1597 painting of the snake-haired Gorgon from Greek mythology. Muniz often recreates a well-known image from art history in an untraditional medium, such as sugar, thread, chocolate syrup, or, as in this work, pasta and marinara sauce, and then photographs the final creation. For this creation, Muniz then transposed the photograph on to a ceramic plate. The swriling pasta noodles cleverly describe Medusa's head of snakes and the blood from Caravaggio's painting is rendered in marinara sauce.

Physical Description
A photograph of a female head made of pasta and marinara sauce printed on a porcelain plate. On verso, the plate is numbered "39;" it is labeled part of "The Peter Norton Family Christmas Project" and dated 1999; the manufacturer is labeled "Made in Bernardaud in Limoges, France;" and, below, it reads "Lead Free Dishwasher Safe." 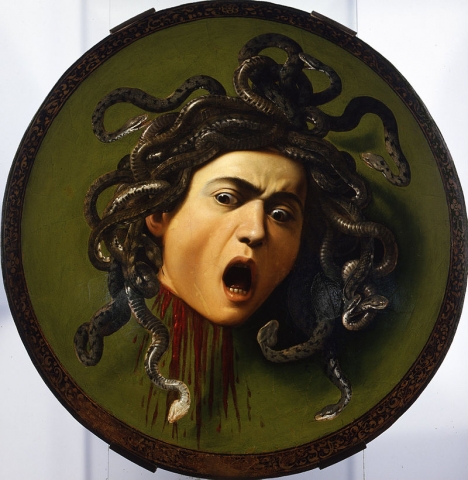 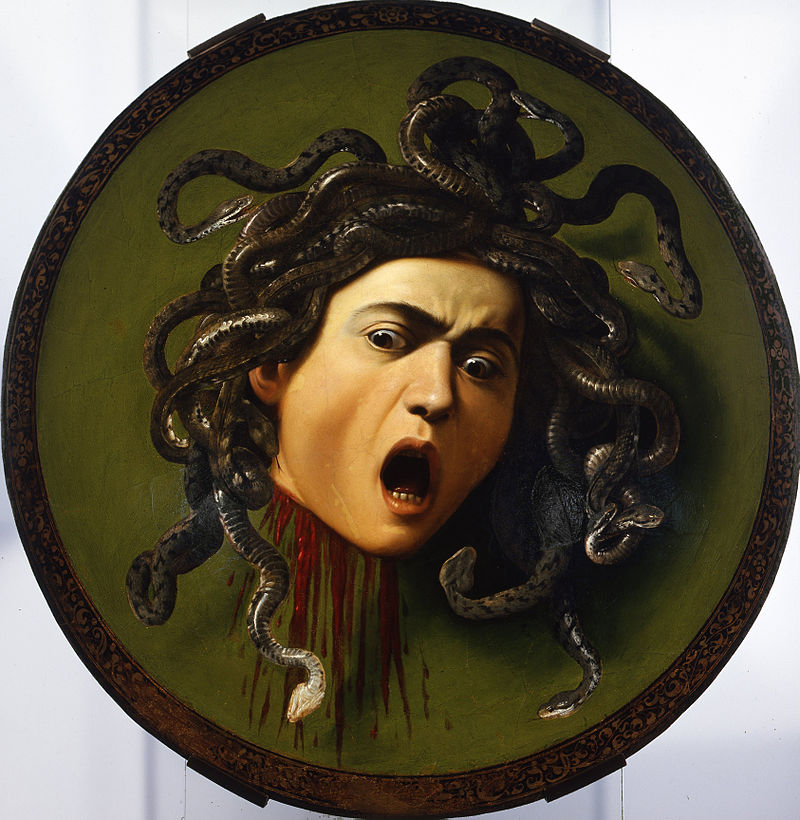 This week, we’re looking at Vik Muniz’s “Untitled (Medusa Marinara)”. The UMMA Exchange object record tells us that this piece, created in 1999, was inspired by Caravaggio’s depiction of the head of Medusa. Muniz recreated Caravaggio’s art out of pasta and sauce, then photographed it and reproduced it on a plate.  The other Muniz work in UMMA’s collection is a similar recreation of another piece out of food. “Untitled (Medusa Marinara)” also recently made an appearance on UMMA’s TikTok!

Medusa is a figure from Graeco-Roman mythology. She is one of the Gorgons- three hideous monster women with snakes for hair whose gaze turns anyone who meets it into stone. Her story has many different variations, but the general idea is that she was not always a Gorgon. At first, she was a priestess of Athena. In the temple of Athena, she had sex with the god Poseidon- some versions say it was consensual, but others say it was rape. In either case, Athena transforms her into a Gorgon as a result. It could have been a punishment for defiling the temple or a protection- as a Gorgon, Medusa would no longer be at the mercy of a man. It’s clearer in the Caravaggio work, but this art depicts only her head because her story ends with her decapitation. One of the quests of the Greek hero Perseus was to kill her and bring her head to King Polydectes. He avoided being petrified by looking at her only through the reflection of his shield. Not pictured in this art are the creatures that sprang out of Medusa’s neck upon her death—Pegasus and Chrysaor.

In popular culture, she makes an appearance in best selling author Rick Riordan’s cult classic The Lightning Thief Chapter 11 as Aunt Em and as a poorly-animated snake woman in both the original Clash of the Titans (1981) and its remake (2010). She is often depicted as a raging monster, but more modern views discuss her with more nuance due to her relationship to Poseidon. 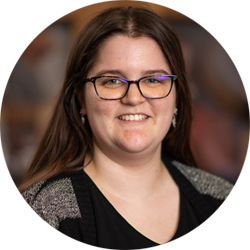 Anneke Benison is a senior studying Classical Civilizations, Medieval and Early Modern Studies, and Museum Studies. Her mythology phase never ended, so now she’s committed to bringing others back into theirs.