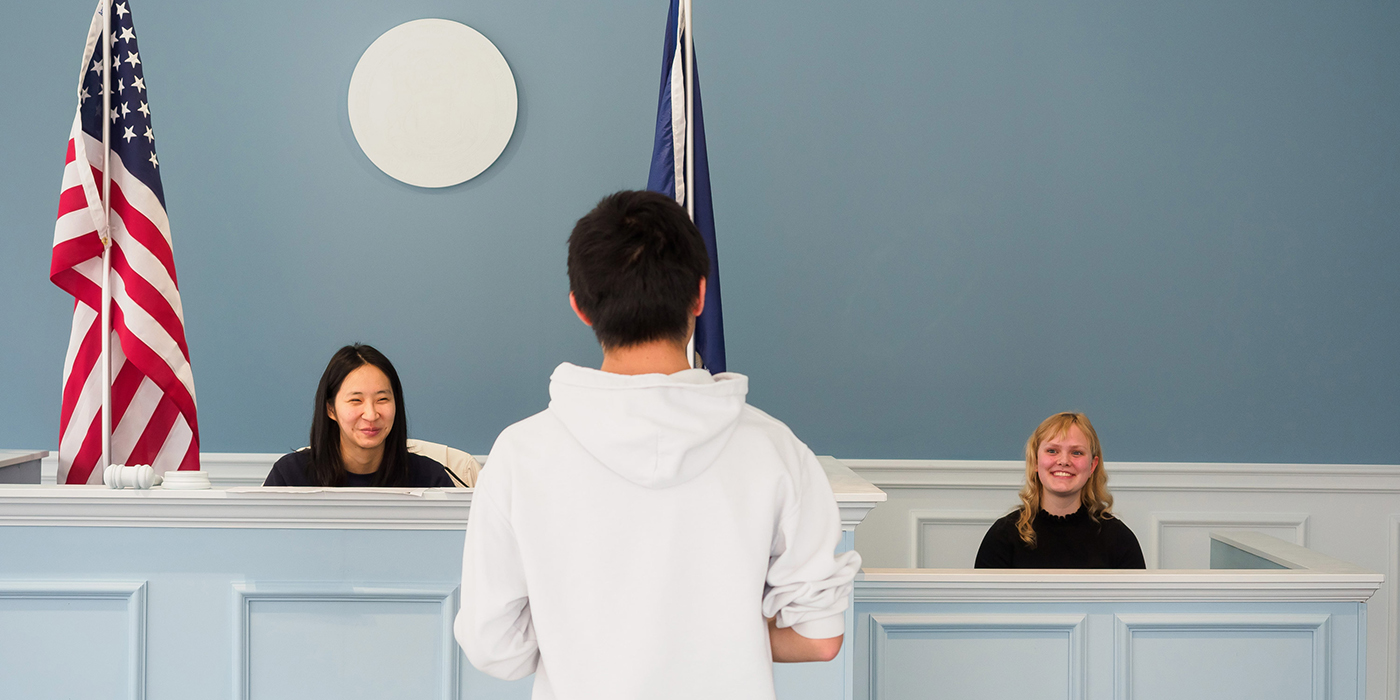 This story was originally published on the Stamps School of Art & Design website.

A courtroom has always been an emotionally charged space.

It’s where ideas and memories are challenged; conflicting arguments are voiced; and our sense of justice is either frustrated or satisfied by a judge’s (or a jury’s) ruling.

Yet this inherent tension is precisely what inspired Courtney McClellan to create Witness Lab, a performance-activated installation at UMMA’s Stenn Gallery (February 5-May 17), co-presented by the Roman J. Witt Residency Program at the Penny W. Stamps School of Art & Design.

Resembling an austere courtroom painted in shades of blue of white, Witness Lab invited visitors to consider the relationship between performance and the law, as well as the concept of witnessing as a social and artistic act.

Programmed events, meanwhile, explored the deep connection between the courtroom’s function and its physical space.

“Chloe Root’s Community High School mock trial team opened Witness Lab,” said McClellan, who hails from Greensboro, North Carolina. “They were really engaged and made me so hopeful about the impact of the project, but also the importance of practice and learning at even an early age.” 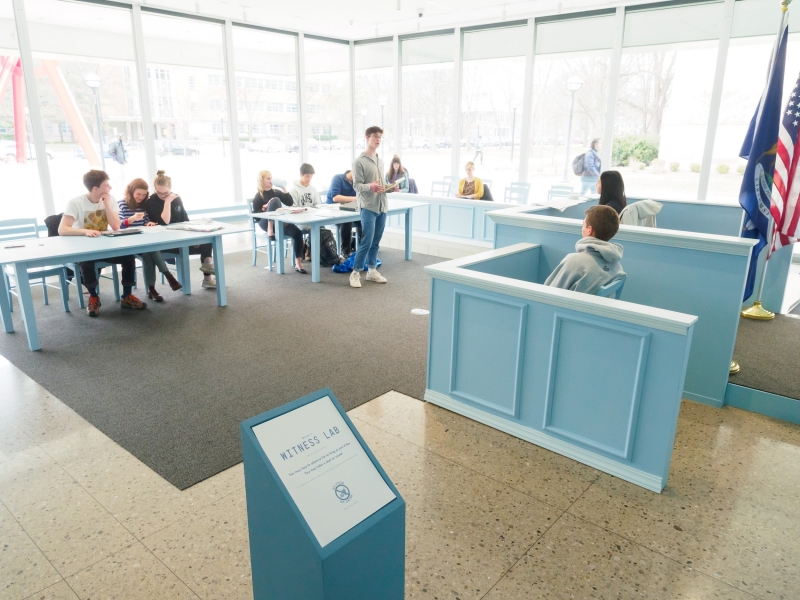 “Len Niehoff’s Salem Witch Trial class was really wonderful,” McClellan said. “At one point, Professor Niehoff shifted from a script based on what is known about the witch trials to an imagined, different kind of trial for the accused witches, even giving them a defense attorney – a role that had not been created at the time.”

Not all the Witness Lab programs happened as planned, of course, because of the coronavirus pandemic. But because McClellan’s work explores who performs the role of witness in our society, you might wonder how she personally viewed this event as it began to unfold during her time at Michigan.

“I studied journalism as well as studio art, so I have been reading the news and watching the coverage both for education and to see how the media is processing this event,” said McClellan. “For me, witnessing is fundamentally a presence and a retelling. We are all doing that in a heightened moment. We are being present, even still, and relaying what we see. This act is both singular and about subjective experience, but it also must be shared. The alone together feeling of this seems apt. Times of crisis are times for bearing witness – for ourselves and for history.”

Though a few Witness Lab events had to be canceled, the installation nonetheless surpassed McClellan’s hopes and expectations. 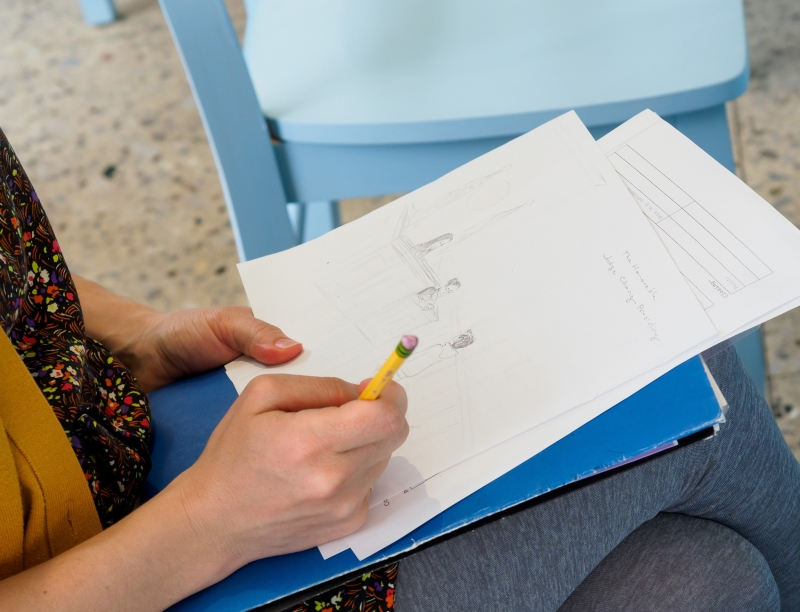 “This was a fantastic experience, and I was thrilled with the willingness and generosity of the U-M community,” McClellan said. “It started with great leaders … telling one person about my project, … and that person suggesting other people to contact. These contacts reached the Stamps School of Art & Design, the Law School, the theater department, the history department, data science, the MIDAS group, among others. This work really required a willingness of others to engage and collaborate, and I was overwhelmed and grateful for the response.”

To build the installation, McClellan worked with Dan Erickson, a theater set carpenter.

“The space needed some durability to be in regular use, and as this was a stage of sorts, it made sense to build these like props or sets,” said McClellan. “I knew I wanted the color to surprise visitors and immediately let them know they aren’t in a typical courtroom. However, it still needed to immediately invoke a courtroom. The blue reminds us that this is a practice space, where the typical rules of power can be altered. This meant it looked like the ‘idea’ of a courtroom, or the thought experiment of a courtroom.”

Even when empty, the space exuded formality – and elicited a subtle level of discomfort. 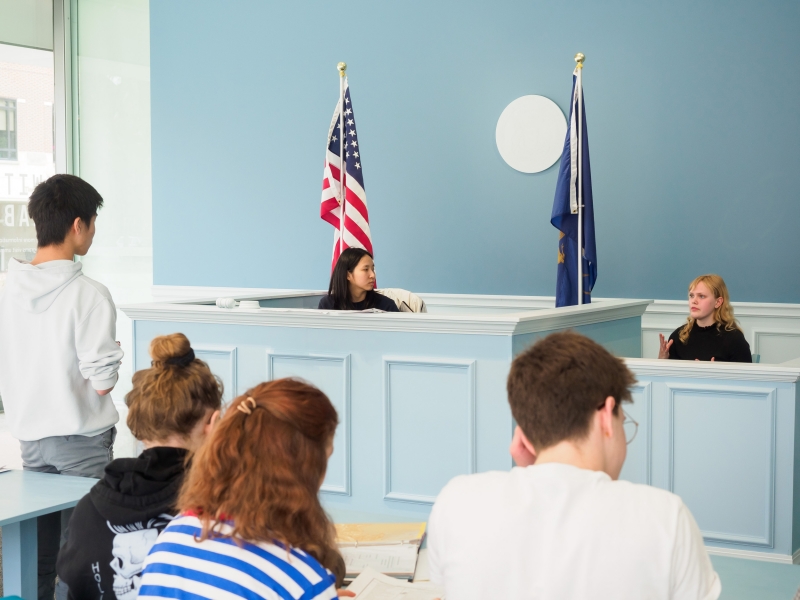 “I am very interested in how courtrooms, even fabricated ones, assume power,” McClellan said. “From the neoclassical architecture, to how the clearly defined roles and designated spaces suggest a hierarchy.”

In this way, Witness Lab managed to inspire new thoughts, whether it was providing a theatrical backdrop for performers or emptily playing host to casual visitors.

“I thought extensively about the importance of practice – about trying something once, and then trying it again – just a little bit differently,” said McClellan. “For me, and in this work, performance is a wonderful form of research. To act something out, or play a scenario out, is invaluable. I am interested in simulation because it is practice that leads to theory, meaning that by doing something again and again, we are capable of testing the edges of an idea. … Also, I enjoy thinking about how those who participated in the space might move through the world, and perhaps their profession, with a slightly different lens.”

One law student, for instance, told McClellan that he’d never been in a courtroom before, and the artist wondered if his experience with Witness Lab would affect the way he viewed the space in future.

“Would he be aware of the performance quality, the hierarchy of power in the architecture, or the importance of visionary fiction/speculation/malleability of the law?” McClellan said. “I hope so. This project has encouraged me to continue thinking and engaging in speculation – something sometimes seen in a negative light – as it pertains to law, journalism, and performance.”

While UMMA is closed to the public, explore the many ways you can engage with the Museum, our collections, our educators, and our programs from your home.

Sign up and we'll send images of select works of art from UMMA's collection directly to your inbox once or twice a week.