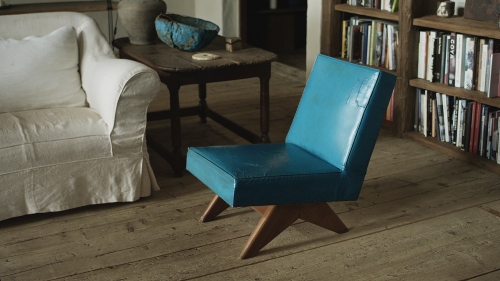 Join us as we welcome multimedia artist Amie Siegel and UMMA’s Adjunct Media Arts Curator Kathleen Forde for an exploration of Siegel’s work Provenance (August 16 – December 7, 2014) and their shared interest in uncommon odysseys. Siegel’s 40-minute video takes us on a cinematic adventure where the protagonist – a chair designed by Le Corbusier and Pierre Jeanneret - journeys around the world and across time to offer a fresh take on the global trade of commodities and the ever changing nature of monetary value in the art world.

Amie Siegel was born in 1974 in Chicago. Her work has been exhibited internationally at MoMA/PS1, Walker Art Center, Hayward Gallery, Whitney Museum of American Art, KW Berlin, ICA Boston, and the Kunstmuseum Stuttgart. Screenings include Cannes Film Festival, Berlin Film Festival, New York Film Festival, The Museum of Modern Art, The National Gallery of Art, and the Harvard Film Archive, among many other museums and cinematheques. She has been a fellow of the DAAD Berliner Künstlerprogramm, the Guggenheim Foundation, and The Film Study Center at Harvard University, as well as a recipient of the ICA Boston's Foster Prize and, most recently, a Sundance Institute Film Fund award for Provenance.

Kathleen Forde is a curator based in NYC and Istanbul and is UMMA’s new Adjunct Media Arts Curator. She also curated the inaugural season of the New Media Gallery in 2012-13. Forde is the Artistic Director at Large for Borusan Contemporary, a collection-based space for media arts exhibitions, commissions and public programming in Istanbul. As Curator of Time-Based Visual Arts at the Experimental Media and Performing Arts Center (EMPAC), Forde commissioned and/or produced a broad range of new work by artists that included The Wooster Group, Laurie Anderson, Japanther, Brent Green, Jem Cohen, Ben Rubin, Jennifer and Kevin McCoy and The Light Surgeons and curated exhibitions such as Dancing on the Ceiling: Art and Zero Gravity. She earned her MA in Post-1945 Art and Theory from Goldsmiths College, University of London and BA in Communications and Art History from the Loyola College of Maryland.

Lead support for the exhibition Amie Siegel: Provenance is provided by the Herbert W. and Susan L. Johe Endowment. Additional generous support is provided by the University of Michigan Penny W. Stamps School of Art & Design, Taubman College of Architecture + Urban Planning, and Institute for the Humanities.