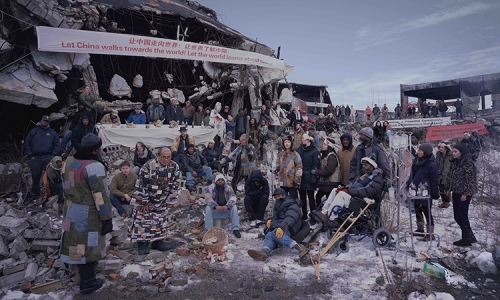 Chinese artist Wang Qingsong’s 2018 work The Bloodstained Shirt restages in Highland Park, Michigan, an iconic 1959 drawing by Wang Shikuo of peasants rising up against a cruel landlord and triumphantly reclaiming their right to the land. Wang’s projects are usually located in China, but while visiting southeast Michigan he was struck by the similarities between the effects of inequitable real estate development on local communities in Detroit, Highland Park, and his native Beijing. His large-scale photograph in the UMMA exhibition Wang Qingsong/Detroit/Beijing features more than seventy volunteers from the greater Detroit community and University of Michigan. Eight months later, Michigan residents created a work of protest banners in collaboration with Wang, also included in the exhibition. Join the artist to hear more about the evolution of this project, from the initial idea to a larger project connecting the two urban centers.

Light refreshments and open gallery after the program.