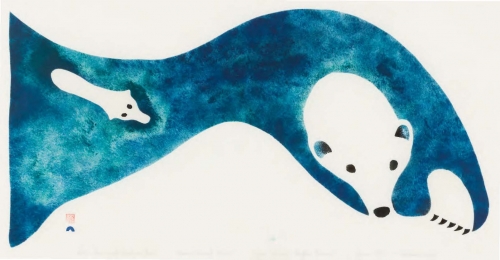 In Conversation:  Contemporary Inuit Art:  An Artistic and Cultural Phenomenon

This event is fully-subscribed. Click here to register for the waitlist.

Tillirnanngittuq (pronounced “tid-ee-nang-ee-took” and meaning “unexpected”) is UMMA’s first exhibition to showcase The Power Family Program for Inuit Art and presents 34 engaging sculptures and 24 striking prints.  In mid-20th-century, the Inuit of Canada’s Arctic experienced profound cultural change – moving from a semi-nomadic hunting culture (one of the last hunting cultures on earth) into permanent settlements, where the Inuit came into daily contact with the technology and values of the increasingly global economy.  Contemporary Inuit art first gained public attention in the 1950s and quickly attracted international acclaim for both its cultural interest and its artistic strength.  Join guest curator, Mame Jackson, for an overview of this fascinating history and for a discussion of the traditional cultural values and “world view” of the Inuit as revealed in time-honored Inuit legends and expressed in Inuit art.

This exhibition inaugurates the Power Family Program for Inuit Art, established in 2018 through the generosity of Philip and Kathy Power.