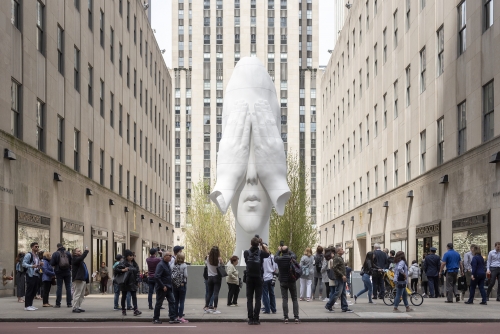 Jaume Plensa: Behind the Walls

Jaume Plensa: Can You Hear Me?

Presented by the Penny Stamps Distinguished Speaker Series and UMMA

“Can You Hear Me?” is a documentary film that follows internationally celebrated Spanish artist Jaume Plensa for a year and a half, offering audiences an unfiltered look into his artistic process. Directed by Pedro Ballesteros, the film presents Plensa’s story across seven chapters, moving between moments from the studio and the production of some of Plensa’s most ambitious public projects, including the recent large-scale works installed at Rockefeller Center and Hudson Yards in New York.

Plensa is one of the world’s foremost sculptors in the public realm with award-winning projects spanning the globe in such cities as Calgary, Chicago, San Diego, Montréal, London, Paris, Dubai, Bangkok, Shanghai, and Tokyo.  His monumental sculpture Behind the Walls was recently installed outside the front doors of the University of Michigan Museum of Art.

Most well known in the U.S. for his iconic Crown Fountain (2000-2005) at Millenium Park in Chicago, the artist has spent the last 35 years producing a multifaceted body of sculpture that speaks to the capacity and beauty of humanity, often bringing people together through the activation of public spaces. Conventional sculptural materials like glass, steel, and bronze blend with unconventional media such as water, light and sound to create hybrid works of intricate energy, psychological weight, and symbolic richness.

Notice of uncensored content: In accordance with the University of Michigan’s Standard Practice Guidelines on “Freedom of Speech and Artistic Expression,” the Penny Stamps Speaker Series does not censor our speakers or their content. The content provided is intended for adult audiences and does not reflect the views of the University of Michigan or Detroit Public Television.

Behind the Walls is a University of Michigan Museum of Art purchase made possible by the J. Ira and Nicki Harris Family.