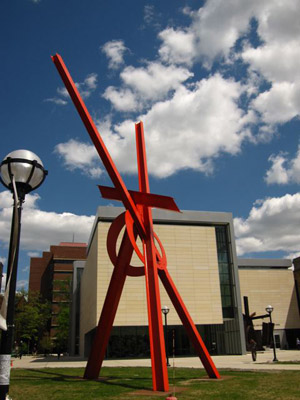 Mark di Suvero, who once described his work as “painting in three dimensions,” draws inspiration from many sources, including mathematics, physics, music, and astronomy, to create large-scale sculptures with a sense of geometry and structure. Like many of his works, Orion—titled after the famed hunter from Greek mythology after whom the constellation is named—is painted bright orange-red, creating a striking contrast with the sky and the work’s surroundings. Since it is meant to be viewed from a variety of angles and positions, the artist paid careful attention to the balance of forms and space. 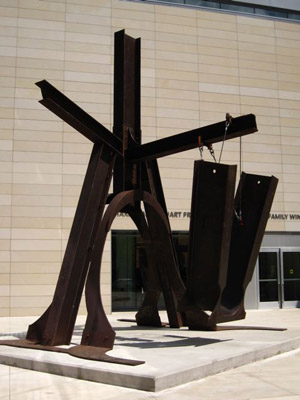 Born in Shanghai, China, to parents of Italian heritage, Mark di Suvero moved to the United States in 1941 and began creating large-scale sculptures in the early 1960s. Like many of di Suvero’s pieces, Shang is a kinetic sculpture that features a suspended platform that swings, an indication of his interest in the technical engineering of his large-scale sculptures. The overall form of the sculpture is reminiscent of a large abstracted Asian character, or perhaps the entrance to a Japanese Shinto temple. Its title refers to the Shang dynasty (1600–1046 BCE) and serves as a tribute to the country of his birth, while at the same time speaking to China’s dramatic increase in the consumption of steel in recent years. 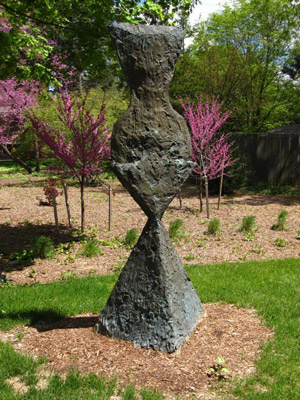 In the late 1950’s Beverly Pepper, who had trained as a painter, began to experiment with sculpture. In the decades that followed, she produced a body of work that is remarkably varied, ranging from intimate tabletop sculptures to monumental outdoor works and site-specific environmental projects that merge with the landscape. During the 1980s her sculptural style emphasized surface treatment and machine-tooled production. Her affinity for the shape and form of industrial equipment stems from years spent in factories fabricating her own sculpture.

Ternary Marker is part of a series of sculptures Pepper has called “urban altars,” which combine a totemic presence with simple archetypal forms. The title alludes to its three main parts: a pyramid and inverted triangle capped by a wedge shape reminiscent of an ancient tool or ritual object. The cumulative effect of these geometric shapes is somehow anthropomorphic. Pepper’s “urban altars” are a kind of archaeological minimalism that maintains a vital dialogue between past and present, primitive and industrial. 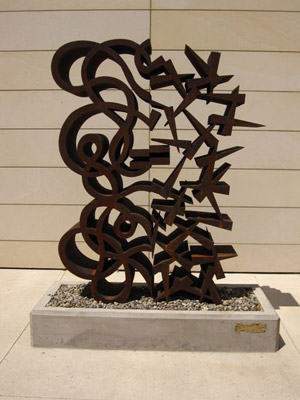 Lucas Samaras’s diverse oeuvre includes painting, sculpture, photography, and performance. In the late 1950s and 60s, he participated in Allan Kaprow’s “Happenings”—a radical form of performance art associated with the Fluxus movement. Today, the notoriously reclusive artist is perhaps best known for his distorted photographic self-portraits, which he calls “Photo-Transformations,” and his unusual assemblages.

“Rather than saying I am a sculptor I could have said I was a boxer.”
“The Greek word for box is kouti which also means stupid.”
—Lucas Samaras

Samaras’s engagement with the box as a sculptural format began in 1961, when he began a series of box assemblages covered inside and out with materials such as pins, razor blades, and hair. By the early 1970s he had produced a subcategory of this work that he dubbed Stiff Boxes; in these he used Cor-Ten steel to make sculptures that explored balance and structure while still referencing the box form. In Stiff Box No. 12, a box is placed at the center of the piece near the implied dividing line between two very distinct halves; this creates a dichotomy between the soft, graceful curves on one side and the sharp, angular edges on the other. With Stiff Box No. 12 Samaras has created a visual puzzle with ambiguous psychological valences. 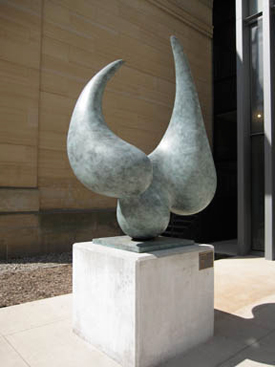 A veteran of the United States Air Force, Erwin Binder learned to cast metal and work with stone as an employee at his family's jewelry business. Wanting to develop these skills further, he enrolled at the Otis Art Institute in Los Angeles and subsequently produced numerous public sculptures throughout Southern California in the 1970s and 1980s. Requiem was commissioned by Bob Hope and the Mayor of Burbank on behalf of a collection of “Proud Patriots” who wanted to erect a tribute to “Defenders of the Constitution, Yesterday, Today, and Tomorrow.” Reminiscent of the later work of Henry Moore or Jacques Lipchitz, Requiem is typical of Binder's lyrical, abstract style, which always maintained vestiges of figuration. Here, his sinuous, bulbous bronze shapes recall an eternal flame that is meant to memorialize fallen heroes. The title of the piece reveals the artist's interest in addressing broad, humanistic themes. With its wing-like grace and beauty suggesting freedom of flight, Requiem serves as a token of remembrance and commemoration to members of the armed forces and the American people. 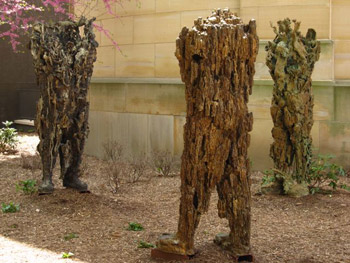 United States, born 1945
Angry Neptune, Salacia, and Stride
2008
Cast bronze
Museum purchase made possible by a bequest from Clarence and Ruth Roy, the W. Hawkins Ferry Fund, and the support of the artist
2009/1.466-468

In her recent sculptural work, the artist (and University of Michigan alumna) Michele Oka Doner has returned to making monumental, figural sculptures—a return that has been characterized as heroic at a time when life-sized sculpture has long been critically out of favor. The three monumental figures placed between the Museum and Tappan Hall to the east are at once dense and fragmented, the thick undergrowth of texture revealing inner voids and complex strands of bronze of extraordinary technical complexity. Majestic yet seemingly crippled, these headless forms—hand burnished and patinated by the artist—evoke ancient, fossilized totems, their surface scarrings suggestive of the decay both of natural forces and of passing time. The artist has a long-standing interest in the natural world, and the three figures positioned here in a kind of timeless, abstracted conversation, ask us to consider the sacred qualities of nature. 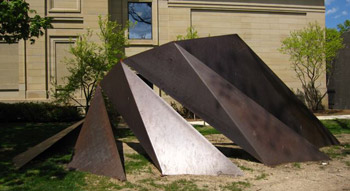 United States, born 1931
Daedalus
1975
Cor-Ten steel
Museum purchase made possible by the Thirtieth Anniversary Project and the National Endowment for the Arts
1977/2.9

Daedalus is one of a series of works Ginnever created during the mid-1970s with titles drawn from classical mythology. Daedalus is the hero of Greek legend who, with his son Icarus, escaped King Minos’s prison on the island of Crete by fashioning a pair of wings out of wax and feathers. Icarus, thrilled by his newfound freedom, refuses to heed his father’s warnings and flies too close to the sun, which melts his wax wings as he falls to his death. The myth of Daedalus and Icarus functions as a cautionary tale against hubris and emphasizes the importance of heeding parental warnings.

Daedalus’s arched footprint and fan of flat planes evoke the shape of a wing in mid-flight. As in much of Ginnever’s work from this period, the open arrangement of geometric forms encourages the viewer to move around the piece. As one circumnavigates it, the sculpture’s formal simplicity at first becomes clear, then it appears to change shape.