Jim Cogswell is Arthur F. Thurnau Professor at the U­­­–M Penny W. Stamps School of Art & Design, where he teaches primarily painting and drawing. In his creative practice he explores a variety of media languages and has been involved in interdisciplinary projects with a diverse range of colleagues. His collaborations have included performance works, videos, book illustration, sculptures, and installations with poets, dancers, musicians, composers, an anthropologist and historian, cosmologists, astronomers, a biostatistician, and computer science and mechanical engineers.

In celebration of the University of Michigan’s Bicentennial, Professor Cogswell was invited to create a sequence of public window installations, Cosmogonic Tattoos, based on reassembled fragments from a broad selection of artworks in the collections of the University of Michigan Museum of Art and the Kelsey Museum of Archaeology. For this visionary project, the artist created a procession of vivid images on the glass walls of the museums in a rhythmically evocative narrative, as well as a series of related drawings at UMMA.

Below is an interview with Professor Cogswell on the occasion of these installations.

Your most recent campus and community collaborations have been vibrant and highly visible vinyl-on-glass installations. How did you come to this medium, and how does it relate to your training as a painter?

Large glass windows are such a common architectural feature of contemporary public spaces that we hardly notice how they open out our built environments. Adhesive vinyl technology enables me to transform those spaces while escaping the physical constraints and social expectations of the white cube. Viewers encounter the work unexpectedly in the places where they walk and congregate. They don’t need to be looking for it, or even identify it as art. Through vinyl I’m also exploring the potential of painting beyond the conventions of brush and pigment applied to canvas. By displacing image making to this new context, I’m able to reinvigorate my own assumptions about what it means to make paintings while still playing with elements common to both—even conventional expectations of a painting as simultaneously window and embellished surface.

Tell us a bit about the title of this dual-site installation.

Cosmogonies are our explanations for how our world came to be, reflecting our assumptions about the fundamental nature of the universe. They inflect our values and help determine how we behave in the world, how we think of who we are as a species, as a society, as individuals. Through collection, curation, and display, our museums narrate the objects they contain to make statements about how we see ourselves. I am tattooing the exteriors of UMMA and the Kelsey in this project—ornamenting their architectural skins with images of what is found inside and reframing the stories they tell about who we are and how we came to be who we are. 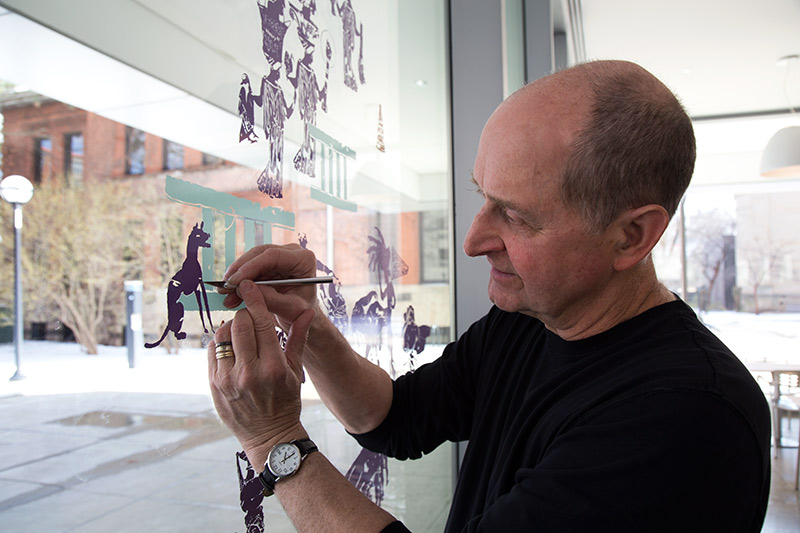 What objects did you draw from in creating this piece and why were they selected?

At the Kelsey, I come face to face with enigmatic objects bearing the traces of hands, and, through those hands, minds and circumstances utterly incomprehensible to me. In the process of working with them, again and again I found myself redeploying a particular hand from a painting of Athena found on a small Greek vase. Shifted from one context to another, that one hand seemed to have unlimited expressive and narrative potential. It was a reminder of the human presence at the other end of this process, the laborers who fashioned these objects. It was an expression of my own fascination with the centrality of making and creation in the development of human cognition, and also of how we use our hands as a form of symbolic communication, to shape and express our inner states. I also kept reusing that one hand because so many hands were missing in the objects around me. Within many of the paintings and sculptures at UMMA hands are central to narrating abstract concepts, the dynamics of human relationships, and the identities of depicted players. I began plundering the hands that I found at UMMA because I needed them so badly to bring the objects from the Kelsey to life, to give them contemporary agency.

In many cases you employ parts of an object, a particular design feature, rather than the whole. Do you want the viewer to be able to recognize the whole from the parts?

It’s not essential that viewers recognize where the fragments I’m using come from. I emphasize their fragmentary character to make it clear that these reconstituted objects don’t belong together, and to trigger associations between otherwise unconnected objects and experiences.

At the Kelsey we encounter many objects in a state of fragmentation, wounded by the violence of history, defaced by natural disaster, reshaped through the normal course of physical decay. Their presence in the museum itself is an act of fragmentation, a separation from the original contexts that gave them meaning. Combining fragments from the Kelsey with fragments from objects at UMMA allows me to capitalize on their original meanings while opening them up to new interpretations. It also turns the tables on time and power relations, ancient cultures looting modern splendor.

Having said that, there are rewards for viewers who recognize the specific origins of a hybrid configuration. For example, the hand staunching General Wolfe’s mortal wound is offering the same towel to Aphrodite in her shower; the inverted Yoruba mask has been reconstructed using fragments from the ancient eastern Mediterranean, a kind of reverse colonization; or the arm riding on a long board and cupping an ear belongs to Nydia, the blind girl 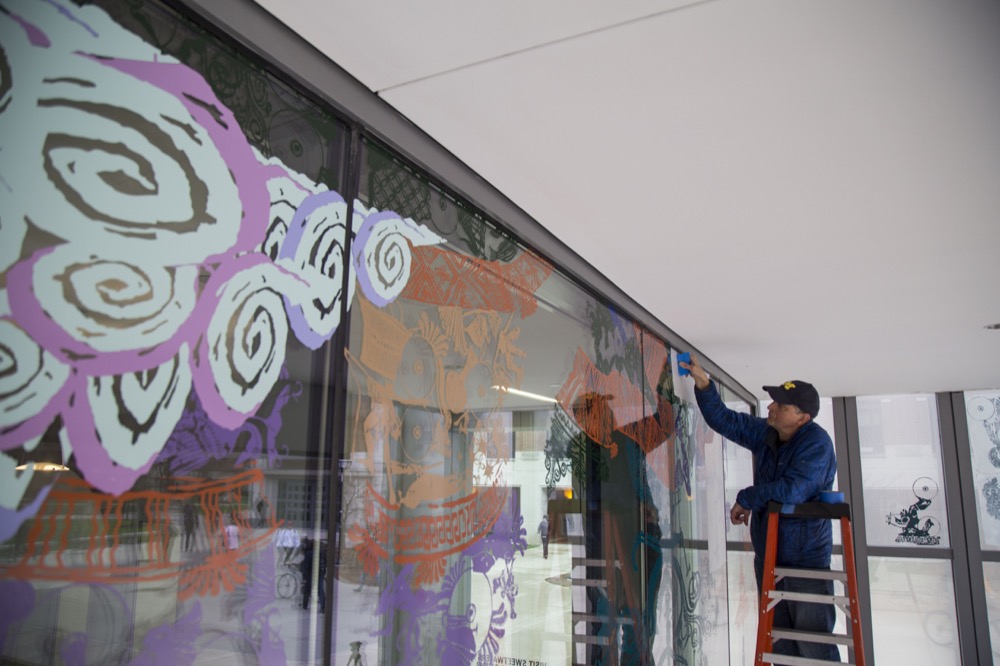 of Pompeii, headed across State Street toward another volcanic eruption in progress at the Kelsey.

You bring together design elements from objects of diverse cultures and periods of time.

My installation comments on museum collections to get at a larger issue, which is the mutability of all objects and meanings, how the significance of an object or experience changes depending on its context. Cultures thrive by borrowing from each other; both the borrowed objects and the societies involved are altered in that transaction. The collected objects in museums are only one example of this. Any gathering of objects alters their individual meanings. Museums provide a context in which gathered objects take on added significance by virtue of the values we associate with museums themselves, most often without examining whose and what those values are.

The story of the objects gathered in our museums is a story not only of displaced things but also of displaced peoples. My installation is as much about migration and exile, loss and longing, as it is about the objects that were plundered, exchanged, and destroyed in the movement of peoples through history. We are witnessing today a mass migration of peoples from places that we as a society have had a hand in making unlivable. Objects from the Kelsey featured in the installation at UMMA are directly relevant to that story, as they are gathered from the very same geographies that are witness to so much heartbreaking turmoil today.

How will the visitor experience and make meaning from these installations at UMMA and the Kelsey this spring?

The gathering of my images on the windows of these institutions is essential to their meaning. The views and reflections on the glass that the vinyl images are superimposed on, how those relationships morph as a viewer walks by, the light shifting according to weather and time of day, the framing and echoing of objects on display nearby, and the interaction with the architectural context all become part of the content of the work. By calling attention to museum display as a picture plane through which we view the panorama of our histories, I’m proposing the museum as a fictive space built on coincidence and personal narrative, the chance layering of objects and representations subject to the reflections and curiosities of viewers as well as the obsessions of our current predicaments. That could only happen on the windows. 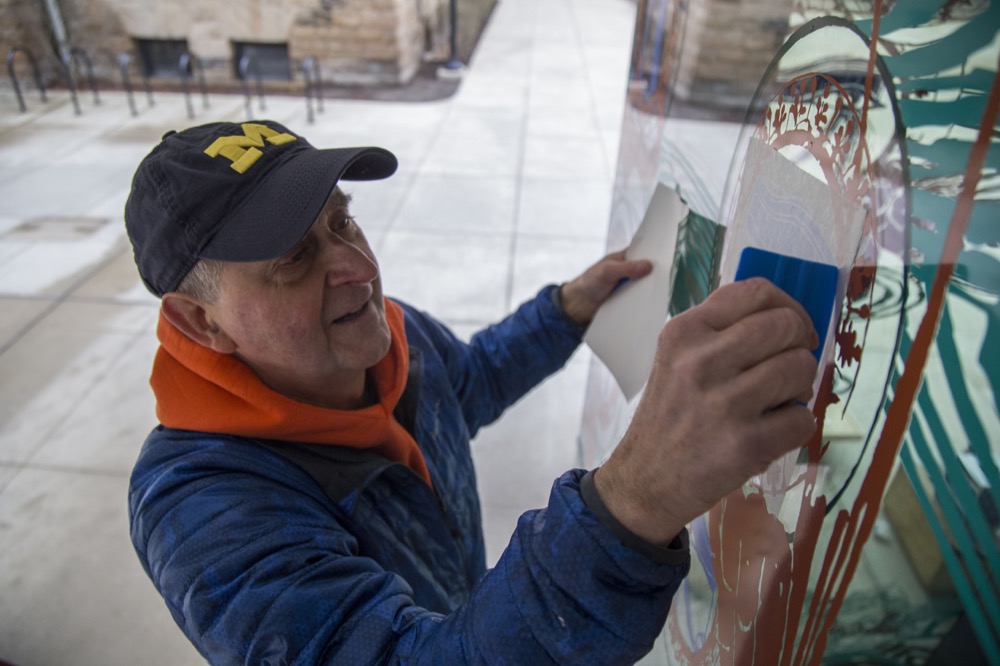 To design my installation I’ve taken objects from different societies with fundamentally different assumptions about what it means to be human and put them in dialogue with each other. I suggest identities radically different from what they appear to be while on display in the collections, but those new identities are themselves unstable. Following their metamorphoses is essential to the humor in the piece and part of its content, a reminder that the whole installation is about flexible identities and meanings. And, at a cosmological level, it’s a nod to the fact that everything we know, including ourselves, is constituted by the same cosmic dust that originated at the singular moment that our universe formed, and has been in a continual state of dissolution and reconstitution ever since. At least, that’s the story that makes sense to me.

Describe for us how the narrative evolves as the viewer moves around the windows of the UMMA Commons. How are the installations at UMMA and the Kelsey in conversation?

The installations at UMMA and the Kelsey are intended as a single continuously unfolding narrative that includes the gap between the two buildings. I think of the narrative beginning in the south UMMA windows facing the courtyard, where patterns establish a vibrating hum—background radiation emanating from the singular moment of cosmic origin.  On the adjacent door, a teeming human presence picks up transmissions that viewers can follow around to the north face of the building and onward to the front entrance of the Kelsey on Maynard Street. Hands sail a harp on a great voyage across the cosmic ocean in the south windows. Weeping hands hover high in the glass corner of the Commons above a pool of tears.  Around that corner calamity awaits. A trail of refugees begins here, fleeing the cataclysm, migrating toward a chromatically more various geography above, mirror image of the doomed place they’ve left behind. A witness tree stands sentinel beside them. Its roots spread upward into the archaeological layers protruding down from the mass of the museum building above. Beyond the tree, a new architectural folly is being assembled around a structural pillar of the museum.

My design for the north facing windows at UMMA describes a procession of figures from the Kelsey, exiles returning home across State Street with souvenirs pillaged from the UMMA collections, items in short supply in the lands of the antique where they come from. Transmission towers broadcast indecipherable dispatches from one side of the divide to the other. I want that gap to speak to us. About distance, movement, migration--sagas of trade, conquest, appropriation, and plunder. Hands changing hands, shaping histories we tell ourselves in order to somehow comprehend it all.

Watch our video for an inside look at Cosmogonic Tattoos.