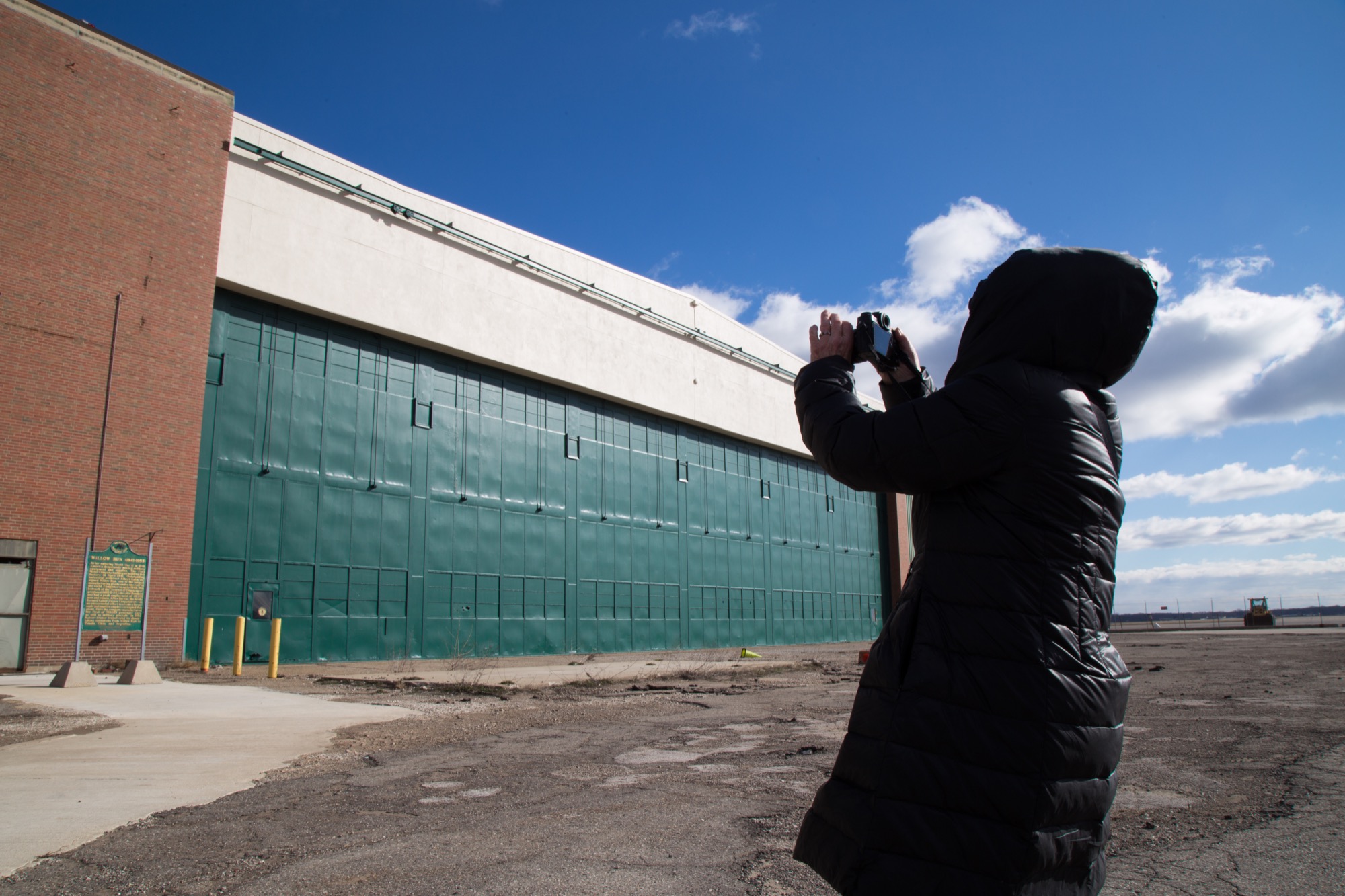 Ruben photographs the exterior of Willow Run. The green wall is in fact the door that would open and allow bomber planes to exit. 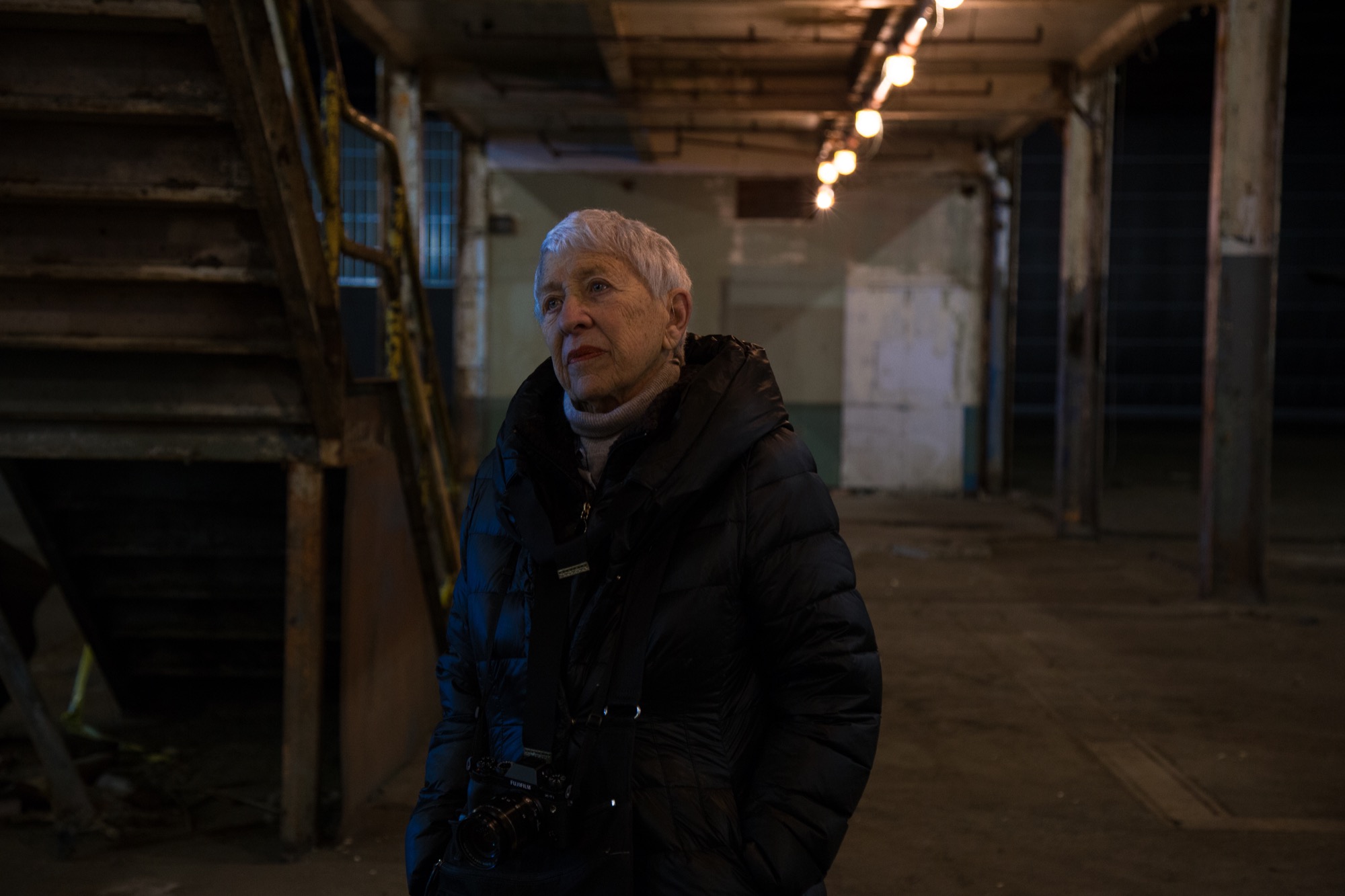 Ruben takes in Willow Run for the first time in 4 years. 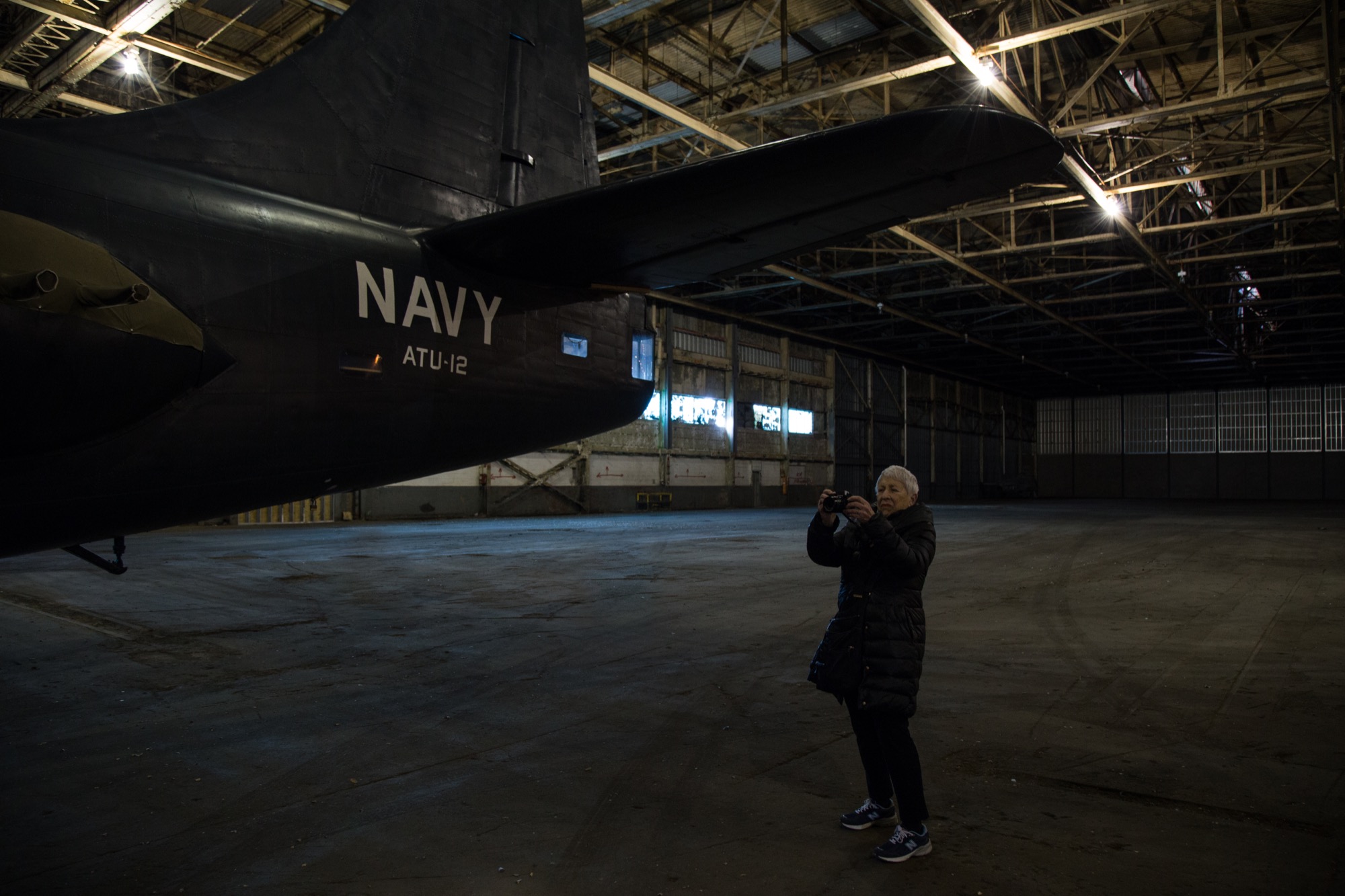 Ruben photographs a bomber in the factory. 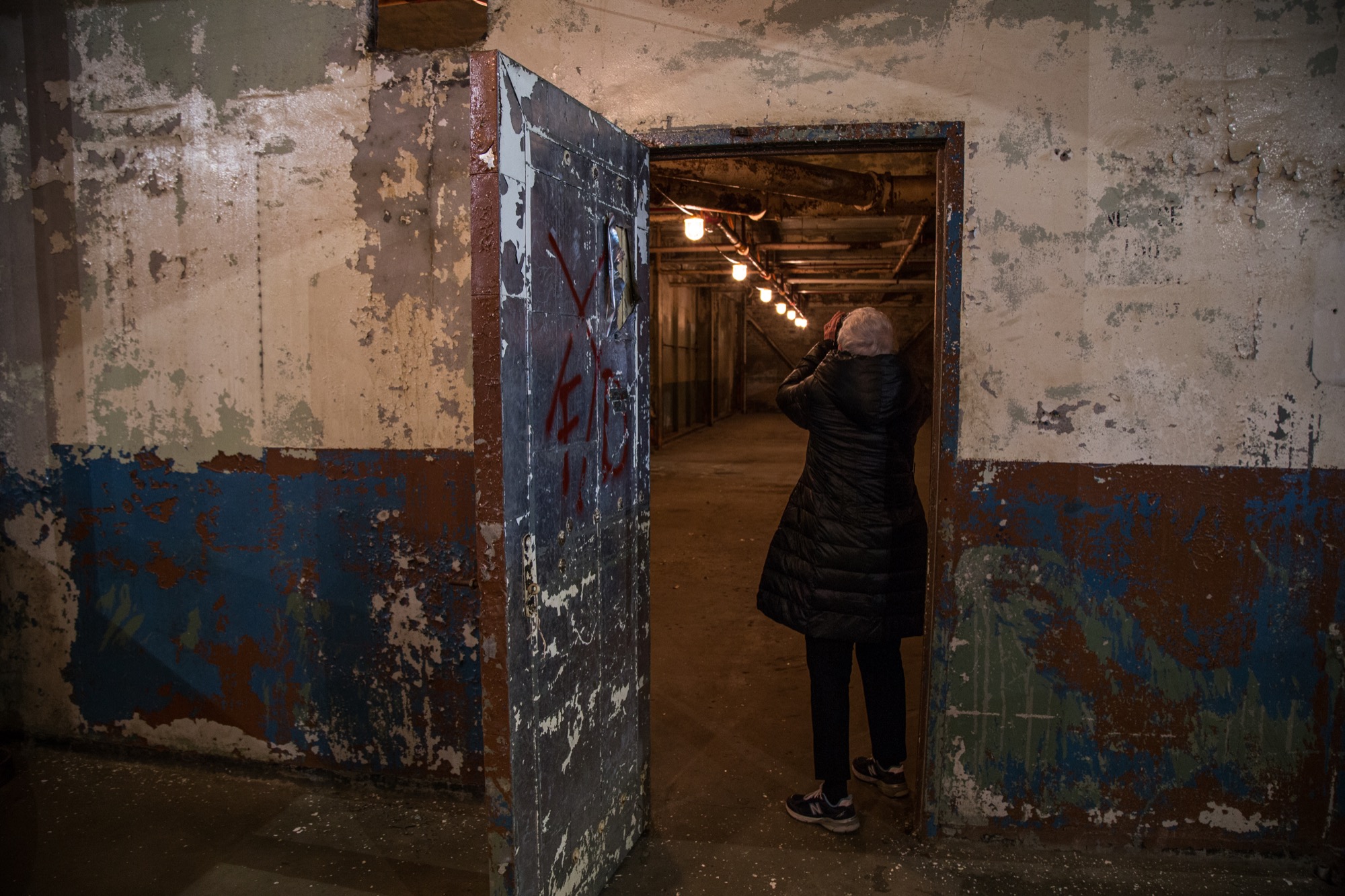 Ruben enters a sub-room of the factory space. 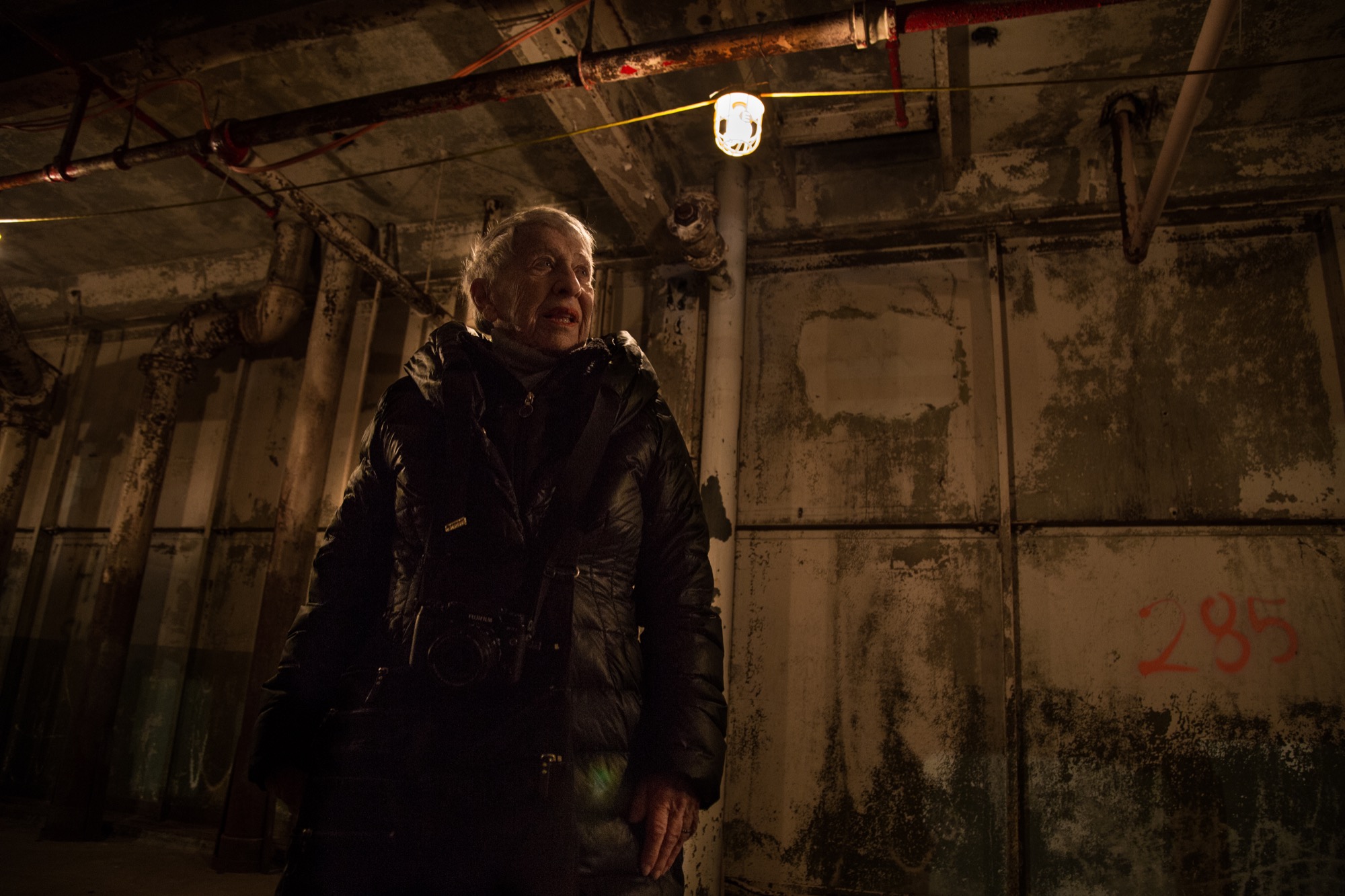 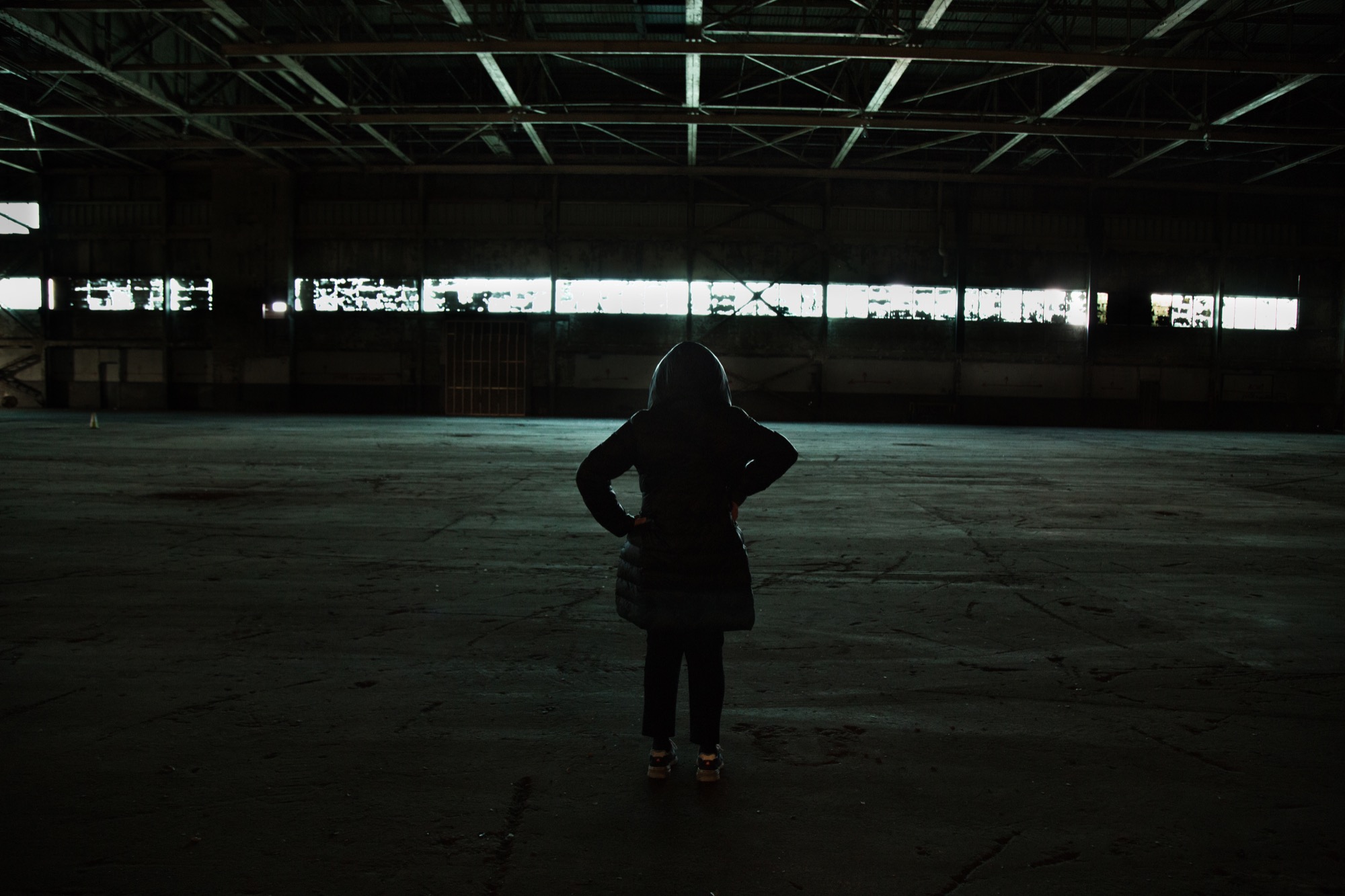 When the lights are off, Willow Run's space is entirely different. 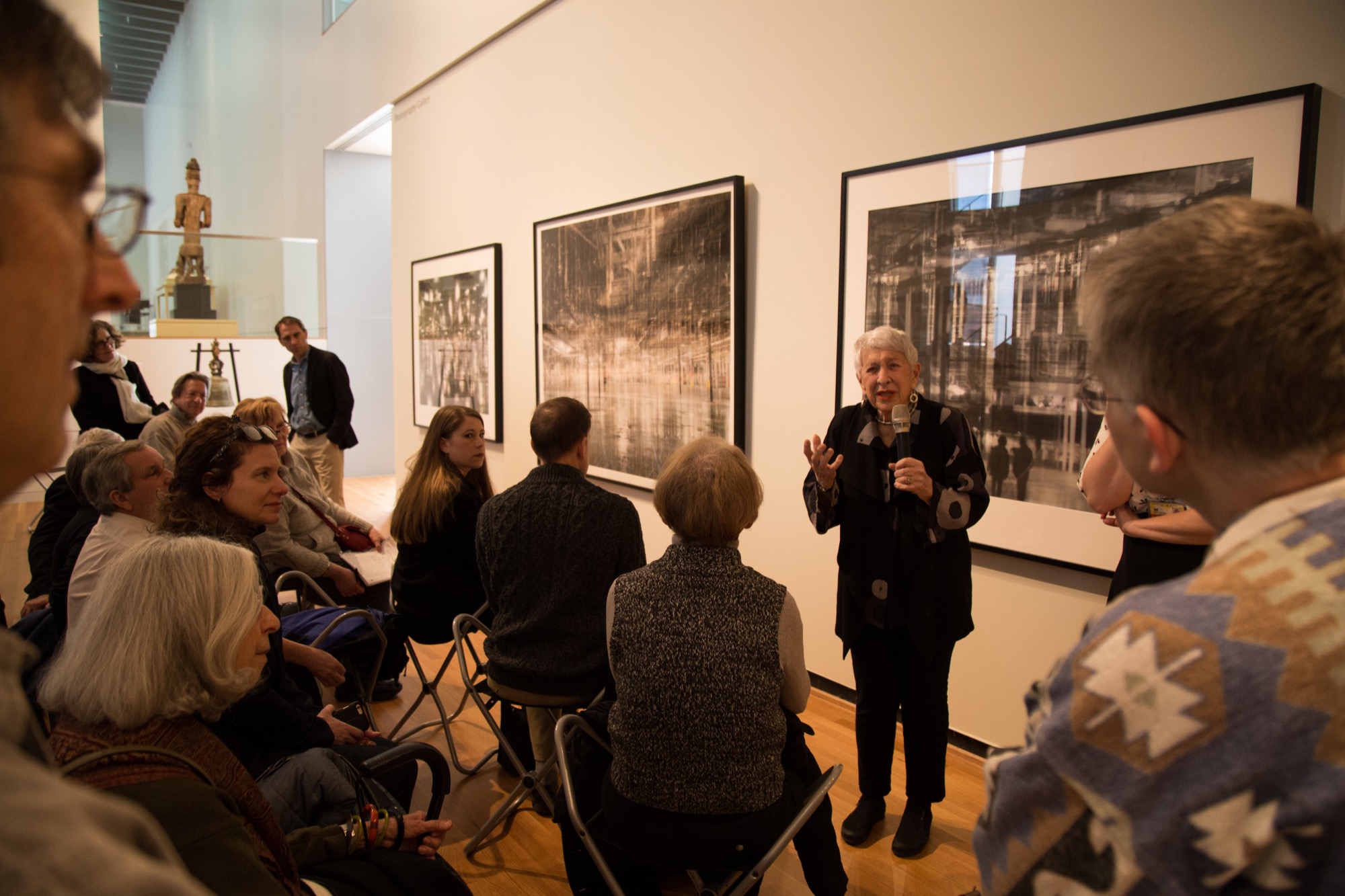 Ruben presenting Mobilizing Memory to a crowd at UMMA After Hours. 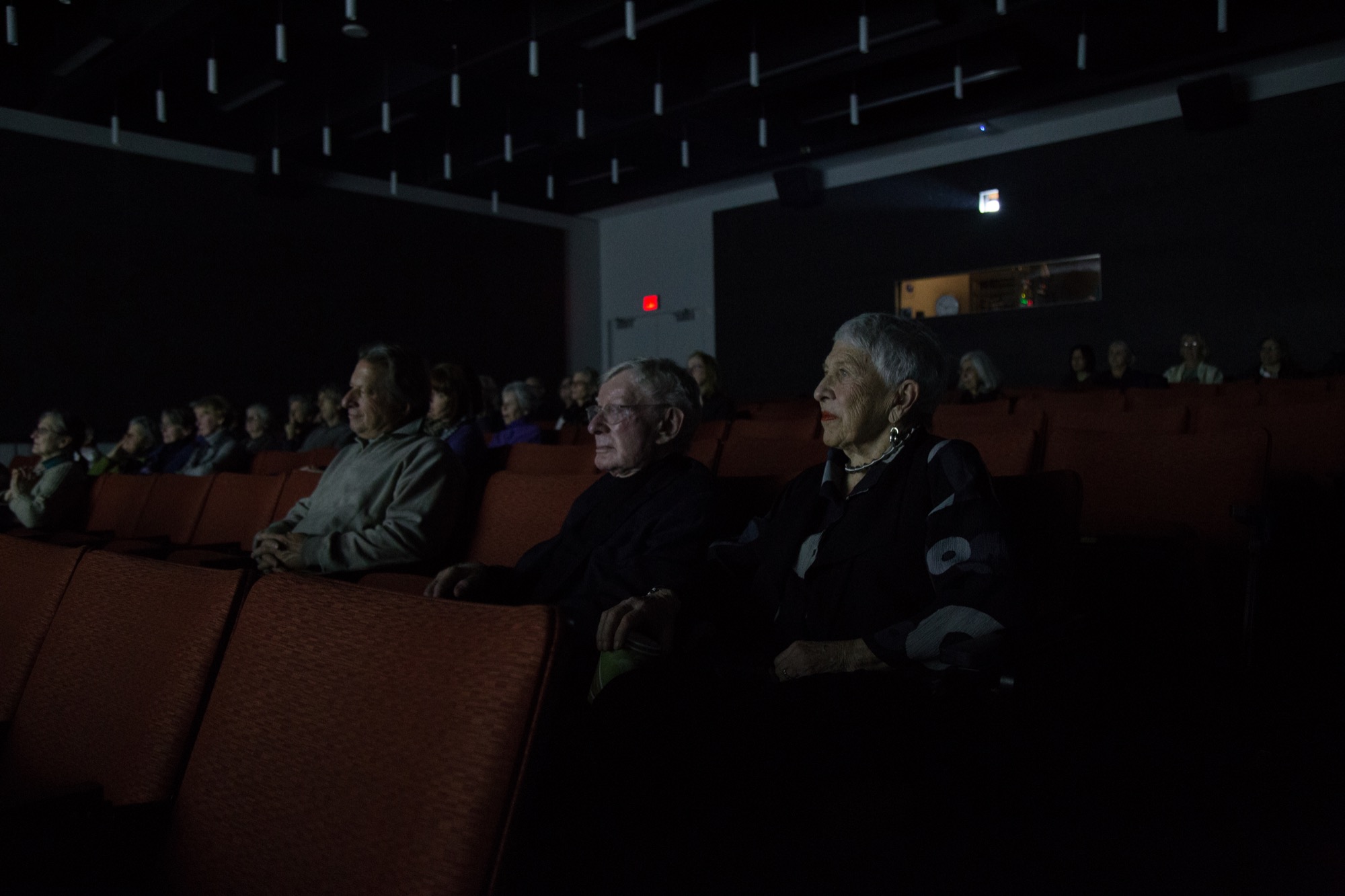 Ruben watching the video and music component of her exhibition, created by Steven Hartke and Seth Bernstein, in UMMA's Helmut Stern Auditorium. 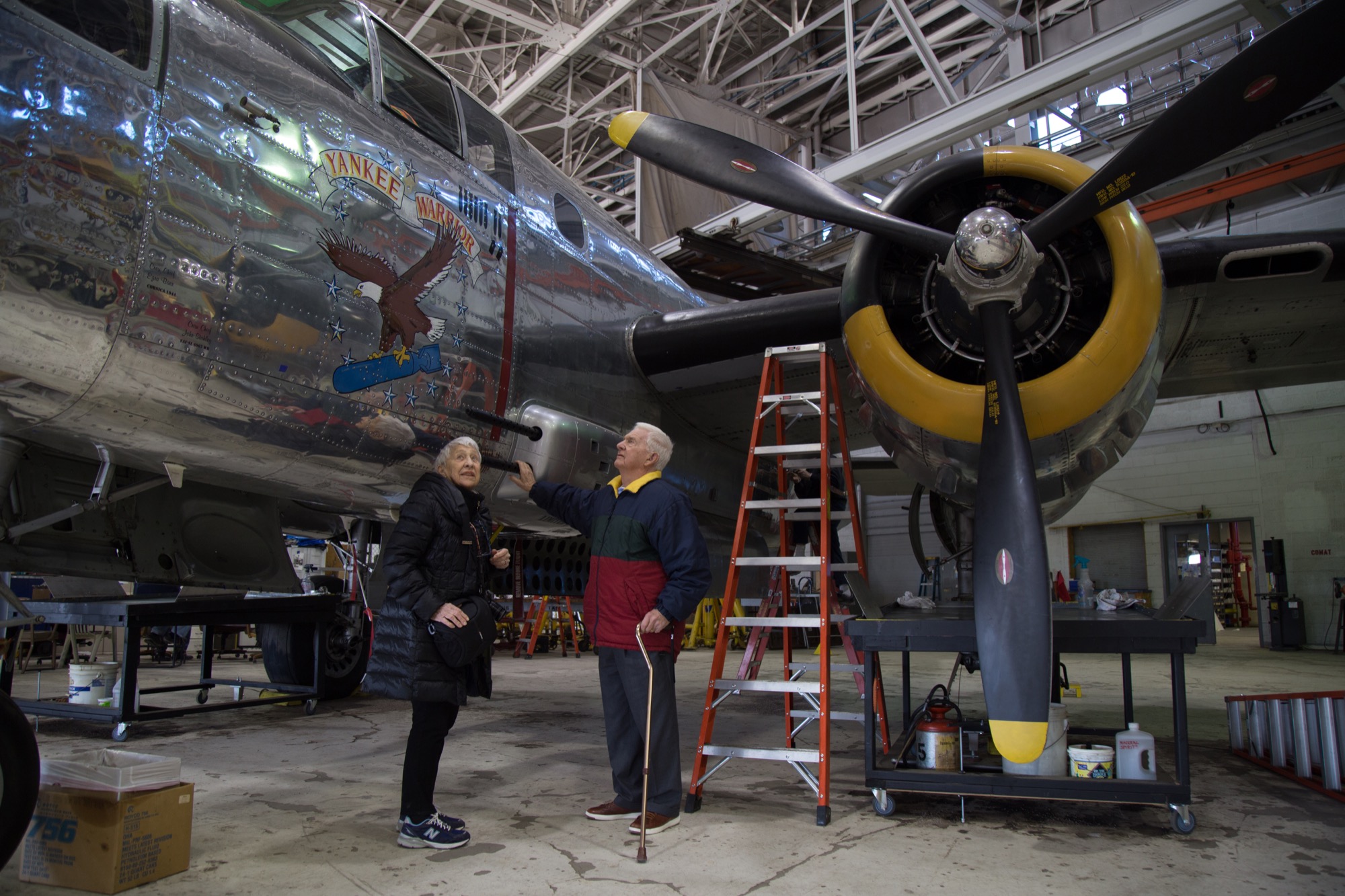 Ruben with her brother, Harry Winston, Jr., in the Yankee Air Museum’s storage as they look over bomber planes created at Willow Run. 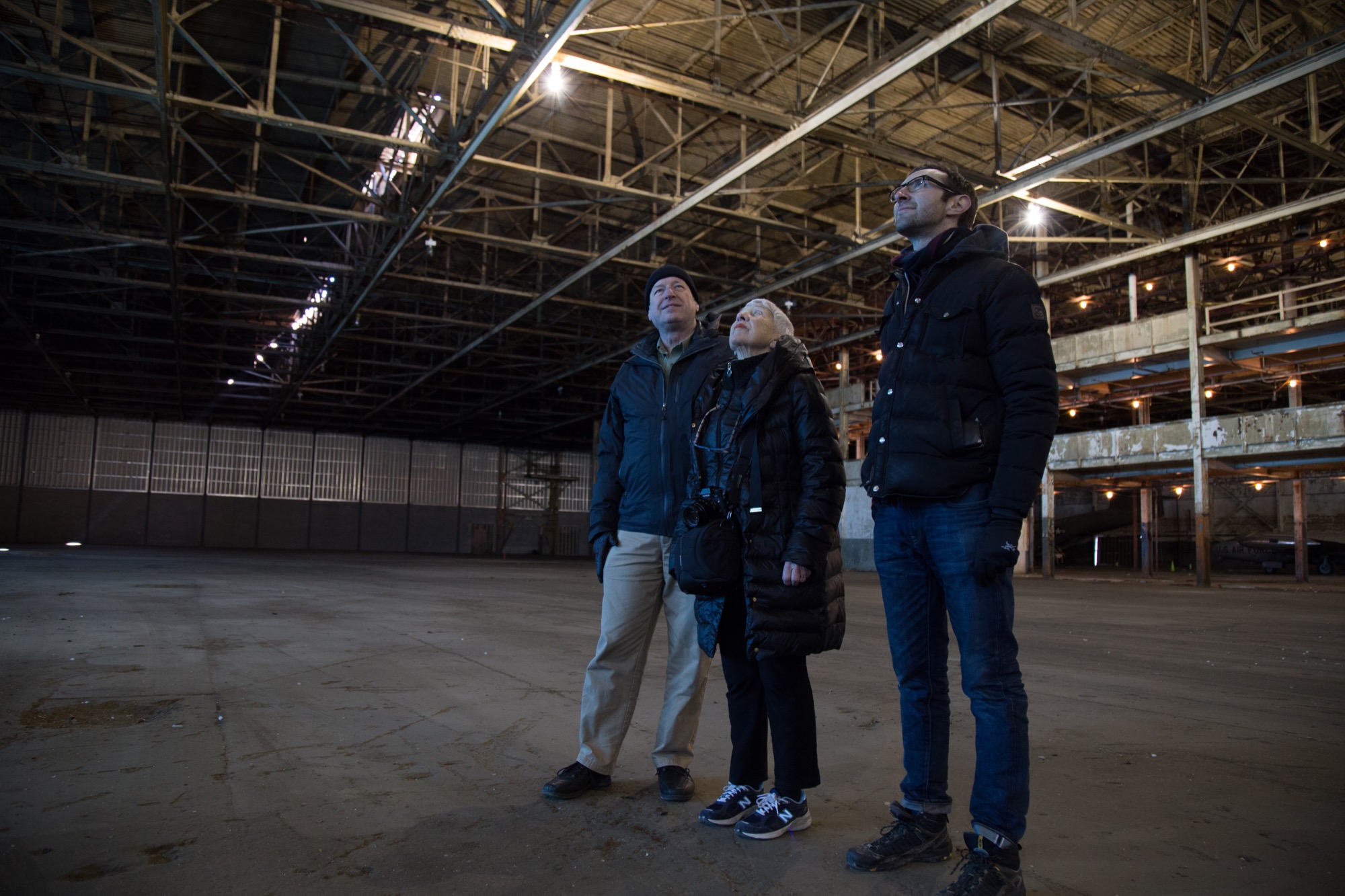 Ruben and her collaborators, Steven Hartke and Seth Bernstein, in the Willow Run factory. 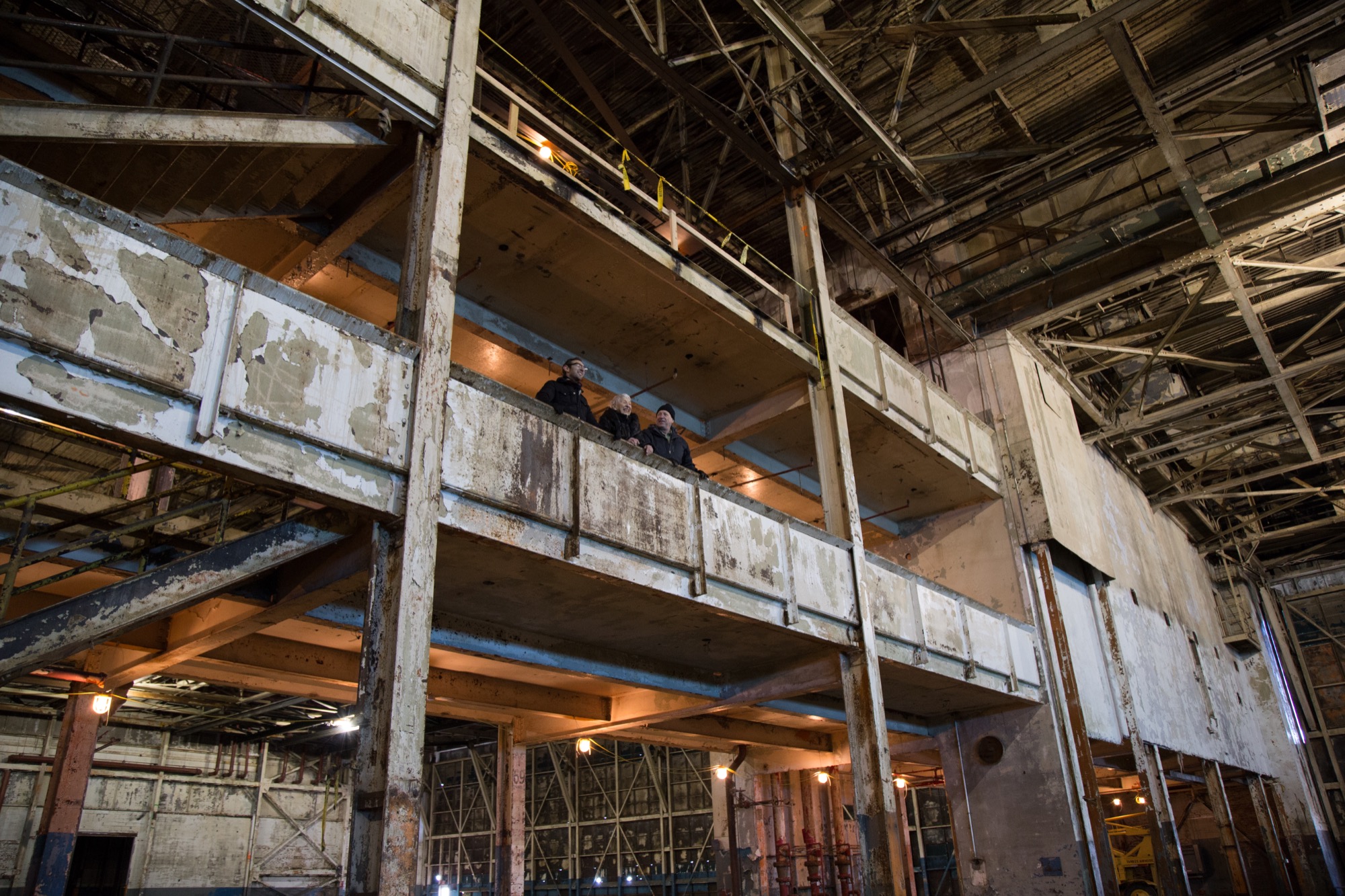 Ruben, Bernstein, and Hartke, observe the factory from above.

Photographer Ernestine Ruben recently traveled from New York City to UMMA this March to speak about her exhibition, Ernestine Ruben at Willow Run: Mobilizing Memory. In traveling to Michigan, she was not only visiting the Museum, but she was also returning to her home state, her alma mater, and to the inspiration for her project.

The subject of Mobilizing Memory is highly personal for Ruben. The exhibition contains photos of the Willow Run bomber plant, which was designed by her grandfather, Albert Kahn. During her visit to Michigan, UMMA arranged for her to see the last remaining piece of Willow Run factory in Ypsilanti Township. While the majority of it was demolished in 2013, the Yankee Air Museum preserved a small fraction of the complex. Ruben had no idea anything remained—she thought the plant had been totally destroyed.

“I thought I was dreaming,” she says. “I couldn’t believe it. It’s alive and it doesn’t give up.”

The plant had changed considerably since her last visit. The paint peeled off the walls and a look of gradual decay dominated the empty area. Ruben found inspiration in it all.

“It was very beautiful,” says Ruben.  “Here, the color was done by nature and by time. It was almost philosophical and more exciting in a way. Things decayed, but there was a kind of eloquence to the way it decayed. It’s got whole new layer now. The beginning of another life.” 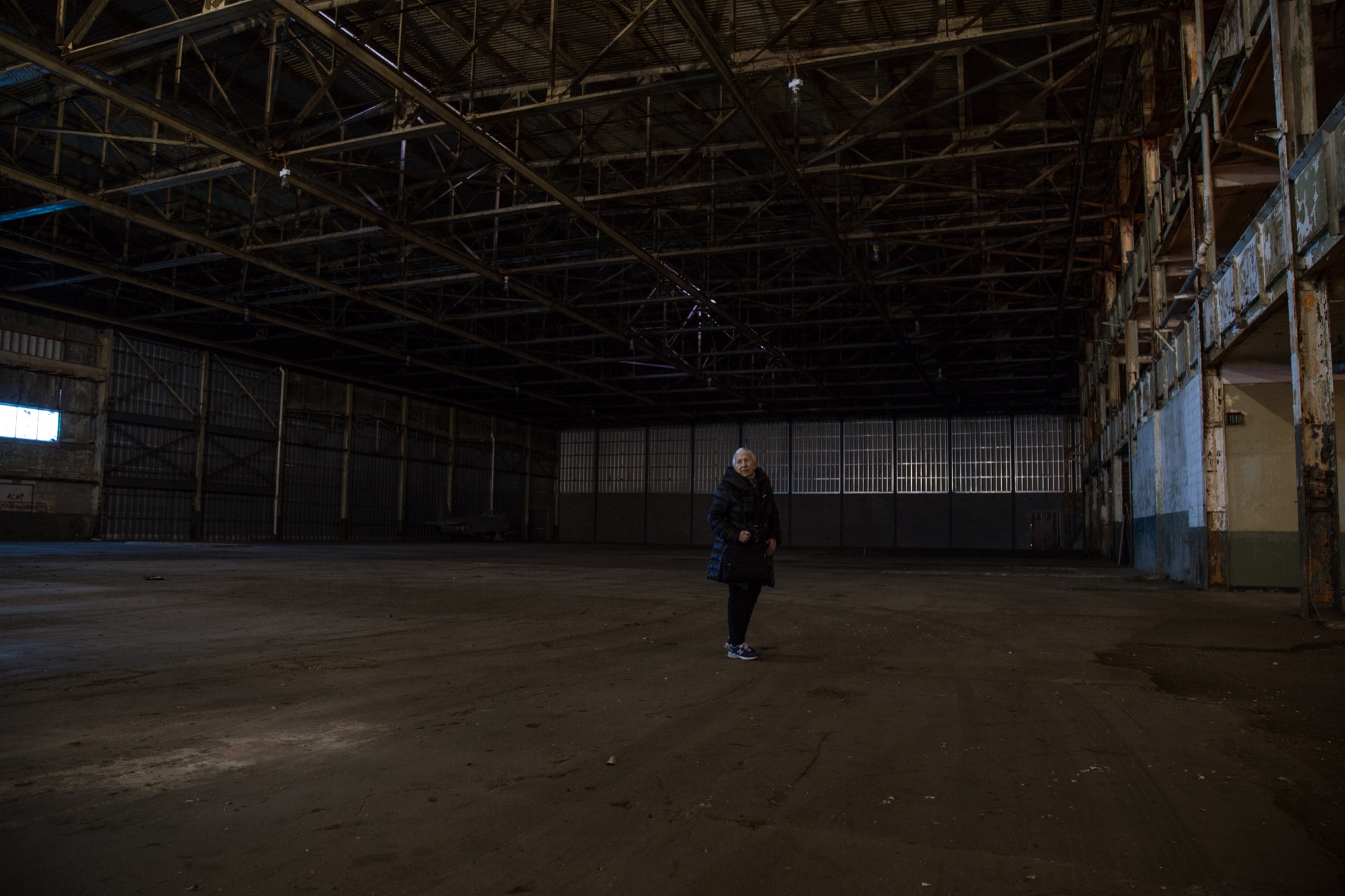 Ruben was so inspired by the space that she planned a return visit in the same week–bringing her collaborators, Steven Hartke and Seth Bernstein. Hartke created an original score inspired by Ruben’s Willow Run photographs, and Bernstein created a video that combined the score with the images. Ruben says visiting the factory reinvigorated their spirit for Mobilizing Memory and the history of Willow Run.

“It was like an empty canvas waiting for my memory and my creativity to go crazy,” says Ruben. “The dreams have come back in a new form.”

Ernestine Ruben at Willow Run: Mobilizing Memory ­is on view in the Photography Gallery until August 21, 2017.

UMMA gives a special thanks to the Yankee Air Museum of allowing us entrance into Willow Run.