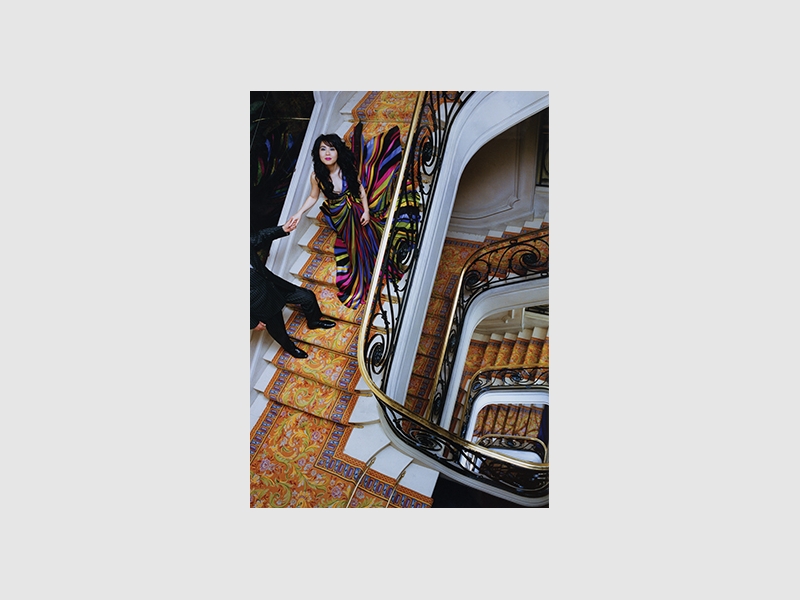 Born in South Korea and educated in New York, photographer Nikki S. Lee is interested in how one’s identity is constructed in relation to others—how our sense of self can be affected and altered by the presence of other people. Paris [206] is one of eight Paris photographs included in her Parts series, which Lee created from 2002 to 2005. Each Paris work (as well as all the other works in Parts) shows the same woman (Lee herself) in different settings, posing and interacting with male partners. But viewers see only the hands or other body parts of the partners—using scissors, Lee literally crops the images of these men out of the photographs. She says, “The purpose of the cut is to make people curious about the missing person and to think how his identity has affected the woman who is left behind.”

Because she uses her own disguised body in photographic work, Lee is often compared to other female artists such as Adrian Piper and Cindy Sherman. However, with her petite Asian body as the subject, Lee presents a nuanced inquiry into gender and racial stereotypes. In the Paris photographs, the settings are luxurious locations in that city, and her missing partner is a white male (his race identified through his skin and hair). In these well-appointed environments, normally accessible only to the French upper class, Lee’s “performed” self almost fits in, but not quite, though her clothes, makeup, and demeanor are perfect. This discrepancy causes us unease with our own gender and racial identities, whether we are like him (male and white), like her (female and non-white), or in another category altogether.

Lee’s shrewd investigation of identity and race is also a focus in her earlier series Projects, which will be featured in the special exhibition Come as You Are: Art of the 1990s, opening in October in the A. Alfred Taubman Gallery I.